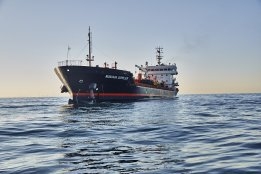 Monjasa operates four vessels in the Panama Canal, and is one of the largest marine fuel suppliers in the country. Image Credit: Monjasa

Marine fuel supplier Monjasa has moved one of its bunker tankers from Dubai to Panama with the aim of reducing waiting times for larger vessels there.

The 8,839 DWT Monjasa Supplier is now making low-sulfur marine gasoil and VLSFO deliveries off Cristobal, the company said in an emailed statement on Tuesday.

The aim of bringing the tanker to Cristobal is to give the opportunity to larger vessels waiting there to pass through the Panama Canal to bunker while doing so.

"However, while smaller vessels can use the time for taking bunkers, larger vessels exceeding inner anchorage restrictions do not have the same opportunity to optimise voyage costs.

"Instead, they have had to once again drop anchor to refuel upon arrival at Balboa.

Monjasa operates four vessels in the Panama Canal, and is one of the largest marine fuel suppliers in the country.

While energy-saving devices might be an operator's first choice, regulatory pressure will make deciding on the right fuel profile for your ship inevitable.