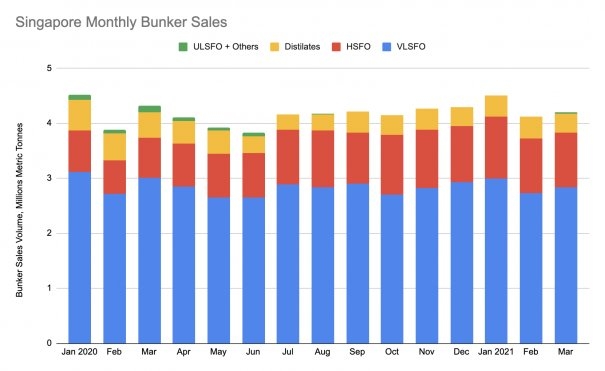 Bunker sales in Singapore posted a 1.9% monthly rally in March as volumes at the world's largest marine fuels hub continued to hold strong.

This is particularly impressive given the boost to sales received in Q1 last year thanks to the introduction of the IMO 2020 rule, although March 2020's volumes level may have been slightly depressed as shipping companies started to use the VLSFO stockpiles they built up before the IMO 2020 transition rather than making new purchases.

The number of ships calling at Singapore for bunkers in March declined by 2.7% on the year to 3,461 vessels. That decline came with an overall drop in traffic visiting Singapore.

Singapore's rise last year -- gaining by 5%, its biggest yearly advance since 2016 -- made it one of the best-performing hubs, and compared with a rise measured in metric tonnes of 2.8% at Rotterdam, and a drop of 11.4% for Panama. 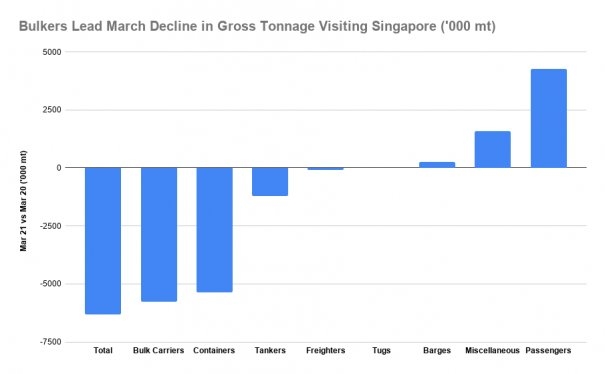 The two ships are due for delivery in 2023

The Gulf of Guinea was responsible for more than 95% of the 135 seafarer kidnappings reported globally last year.

"I see the high-volume ports being increasingly dominated by the cargo players, and the smaller ports continuing to be controlled by the companies with local knowledge."