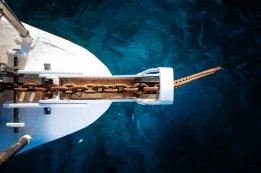 The absence of cruise calls to Australia's ports has seen a drop off in bunker demand.

Viva Energy, one of two refiners still operating in the country, saw its marine fuel sales fall by 39% in the first quarter of this year compared to the same period last year, according to price reporter Argus Media.

Looking ahead the refiner hopes to gain domestic market share from the closure of the Altona and Kwinana plants.

The company is in talks with the government over subsidies aimed at keeping its 128,000 barrels a day Geelong refinery running, the report said.

The prospect of being wholly reliant on foreign fuel imports has caused the government to review its security of supply policy.

TECO 2030 to Develop Onboard Carbon Capture

CO2 from ship's exhaust can be stored onboard and discharged in port.

Industry bodies have argued that both their proposal for a small bunker levy to build up a decarbonisation research and development fund and wider market-based-measures should be discussed simultaneously at the IMO this year.