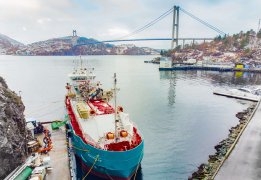 The retrofit of the Bergen LNG -- remodelled from a conventional bunker barge formerly known as Oslo Tank -- was completed earlier this month, and the vessel has since successfully completed sea trials, Høglund Marine Solutions, which supplied the ship's LNG cargo system, said in an emailed statement on Monday.

"The trials lasted for four consecutive days with hardly any downtime," the company said in the statement.

"After having been given the green light on both its mechanical and control equipment system, as well as its flow meters, the vessel is now already in operation."

The company is looking for candidates with two to four years of experience as a finance business partner or business controller.

4.5% of the firm's current fleet by container capacity will be capable of running on methanol by 2026.

As part of hydrogen supply pilot project between Austrailia and Japan.