Stena Bulk to Use Offsets to Meet Decarbonisation Targets 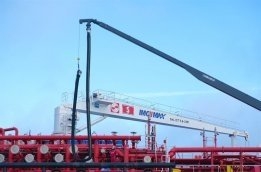 Stena Bulk expects to use carbon offsets to help the company reach its targets for decarbonisation, according to maritime news provider TradeWinds.

The company is seeking to become carbon-neutral by 2040.

The use of carbon offsets is "definitely a pathway that we will take, going forward," TradeWinds cited Stena Bulk President Erik Hanell as saying in an interview on Tuesday.

Over the longer term, the company plans to bring in zero-emission vessels.

"Offsetting is one thing, but I don't think that's the main [solution]," the publication cited Hanell as saying.

"It's going to be a combination of everything."

Stena has seen limited uptake from its customers to offset the carbon emissions from their shipments by funding the firm's use of biofuel rather than conventional bunkers, TradeWinds said, with just three shipments using the system since its launch in June 2020.

"We do not see LNG bringing the necessary carbon reductions, and it is still a fossil fuel."

The company arranged the bunkering of its chartered ship the Takaroa Sun with methanol from the barge MTS Evidence.