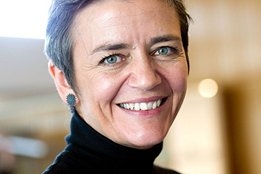 The European Shippers' Council (ESC) has asked the European Commission (EC)'s Commissioner for Competition, Ms Margrethe Vestager, to investigate the recent implementation of emergency bunker surcharges (EBSs) by a number of major carriers.

"The fact that the container liners, who announced that they would apply such a surcharge, have been doing it almost simultaneously is, from ESC point of view, tantamount to price signaling, and therefore, is in contradiction with the spirit of the "GRI commitment" which liners agreed upon with the European Commission 2 years ago," ESC said in a strongly worded letter Wednesday.

Moreover, ESC says that in the present circumstances such surcharges are not even justified.

"Oil prices had indeed been rising during the last month, but the latest hike cannot be assimilated to an emergency. Oil price fluctuations, up or down, had been frequently happening in the past years and no negative surcharge was applied when the barrel of oil went down to 40 US$ some time ago," the Council said.

"The application of any emergency surcharge should be reserved for events that can not be foreseen (such as a crisis influencing the availability of oil)."

The comments come as part of an escalating war of words over the controversial surcharges that many shippers clearly feel are unjustified.

At the end of May, the Global Shippers' Forum (GSF) denounced the move as "an unwelcome legacy of the cartel era" that has "no place in a modern liner shipping market."

Last week, British International Freight Association (BIFA) weighed into the discussed by asserting that "additional surcharges imposed by shipping lines should not be allowed."

The UK-based group also claims there is "no real explanation or justification" to many such surcharges.

Among those offering a counter view is Alphaliner. By its calculations, real container freight rates, after accounting for changes in the cost of bunkers, have fallen by more than 50% in the last 20 years.

"The savings from operational and organisational efficiencies in the last two decades have mostly been passed on to shippers in the form of lower freight rates - both in nominal and in real terms," Alphaliner said in its weekly newsletter.

For the record, the carriers say the surcharges are absolutely necessary and are only implemented to cover the increased cost of fuel.

Maersk Line, for example, said it would introduce its Emergency Bunker Surcharge (EBS) as "the increase in bunker price in 2018 has been significantly higher than what had been expected," while MSC said it had faced rising fuel prices of more than 30% this year, and almost 70% since last June.

At the time, Ship & Bunker data indicated the average price of key grade IFO380 at major ports had risen about 44% year on year.

Analysts say the move is all about politics and little to do with declining stocks.