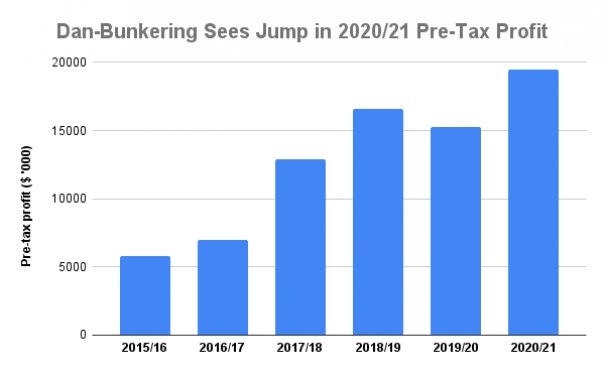 Marine fuel supplier Dan-Bunkering is expecting to gain further market share over the next 12 months after a 28% jump in profits and a 7.2% rise in sales volumes in the year to April 30.

The company saw pre-tax profit of $19.5 million in the last financial year, it said in an emailed statement on Wednesday, up from the $15.2 million noted the previous year.

Claus Bulch Klausen, formerly senior vice president, was appointed CEO last month after a three-year interregnum with no CEO following the departure of Christoffer Berg Lassen to parent company Bunker Holding in March 2018. In an interview with Ship & Bunker this week, Klausen said he sees the company's prospects continuing to improve this year as the world recovers from the COVID-19 pandemic.

"We are expecting to continue to increase market share at a similar pace as we did last year," he said.

Klausen declined to comment on whether the firm's profits could continue to rise this year; rival supplier Monjasa has said it expects its calendar 2021 profits to decline compared to the previous year. Dan-Bunkering's pre-tax profits have seen a stellar rise over the past six years, with the 2020/21 level more than triple that noted in 2015/16.

The company is most positive about its prospects in Asia, but notes uncertainty in all markets this year.

"What we saw last year has to be seen in the light of the coronavirus pandemic," Klausen said.

"In the industry, some regions suffered while volume in other regions soared.

We do expect continued growth in Asia, but it is simply too soon to say if we will see growth spread out evenly world-wide, and it is uncertain whether there will be set-backs in the fight against COVID-19 or regional lockdowns etc.

"Such scenarios will have an impact on the industry, and it is too early to conclude anything."

Klausen said one of the initiatives he is focusing on as CEO is an investigation of the firm's potential role in the alternative fuels space.

"Although the structure of the management team has changed, we are still the same four people in the team," he said.

"With help from our employees, we have decided on various strategic initiatives that we are currently in the process of implementing.

"These initiatives are, among other things, catering for the continued adding of value in the traditional fuels space and in addition to that, we are the company that clients are turning to when it comes to seeking consultation and knowledge on 'new fuels'.

A wide range of bunker fuel companies have announced plans in this direction since the start of the year, with several new LNG bunker supply operations as well as new biofuel and carbon offset offerings. For now, Dan-Bunkering sees its role as providing guidance to customers looking to start shifting away from conventional bunkers.

"For the time being, we see traction in NWE, USA, and Asia and mainly for requests regarding Biofuels and LNG," Klausen said.

"While the volumes supplied are small, the number of questions is not.

"Blends in biofuel, pricing, procedures, trial runs etc are some of the areas within the alternative fuels space that we are receiving questions about from our business partners.

"Many of our clients are now trying to build their own strategy on supply going forward and this is where we can offer solutions, supply, and guidance."

One cloud on the horizon is the legal proceedings facing the company, with allegations of EU sanctions breaches being heard in the Danish courts from October.

Dan-Bunkering itself as well as Bunker Holding and its CEO, Keld Demant, face charges. The case relates to 33 deals of jet fuel to Russian counterparties in 2015-2017, with the fuel ultimately ending up in Syria in breach of EU sanctions.

Bunker Holding denies the allegations, and has previously said that its internal investigations had revealed no signs that anyone within Bunker Holding or Dan-Bunkering had any knowledge of the alleged sanctions breaches.

The company has installed an 18m eSail system on board the theatre ship La Naumon.

GAC is aiming for net zero emissions by 2030.

The company is looking for candidates with previous bunker trading experience.