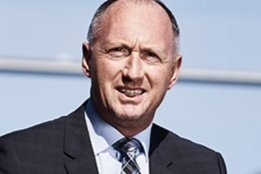 Increased fuel-efficiency measures taken by shipowners in response to rising prices and the need to cut emissions may hold the global bunker market back from growing this year, according to marine fuels conglomerate Bunker Holding.

Bunker Holding itself has just reported healthy volumes growth of 10% in the 2020/21 financial year, although its pre-tax profits more than halved from the previous year's record high. But CEO Keld Demant sees less rosy prospects for the global market this calendar year, believing the total market will not yet recover the volumes seen in 2019 before the COVID-19 crisis.

"We still see some impact from the pandemic, and slow steaming has been part of the way you optimise your shipping," Demant said in an interview with Ship & Bunker on Tuesday.

"A lot of shipping companies have actually optimised the way they are running the boats, the routes they are sailing.

"This optimisation will also take the total market to at best flat this year."

Demant sees his firm and its brands taking further market share despite the overall drop in worldwide volumes.

"I'm not the one to judge if the market has declined by five, ten or fifteen percent, but the overall bunker market has been declining," he said.

"I think [Bunker Holding] will definitely be growing.

I don't expect double-digit growth this year, but I do expect to see growth.

"I don't expect double-digit growth this year, but I do expect to see growth.

"We are going for increased volume simply because we see that the number of clients we've got on board are all asking for more product in more ports, more credit now we've seen that the price has increased."

Demant contrasted his firm's performance with that of World Fuel Services, which has seen a sharp decline in bunker volumes in recent years. WFS sold 16.8 million mt of marine fuels in the year to March 31, down by 18.4% from the same period a year earlier.

"The only one we can benchmark against is World Fuels because they are publicly listed, and we've seen that they have declined in volume," Demant said.

WFS has for several years talked of its declining volumes as part of a strategy of cutting 'low-margin, low-return activity'. 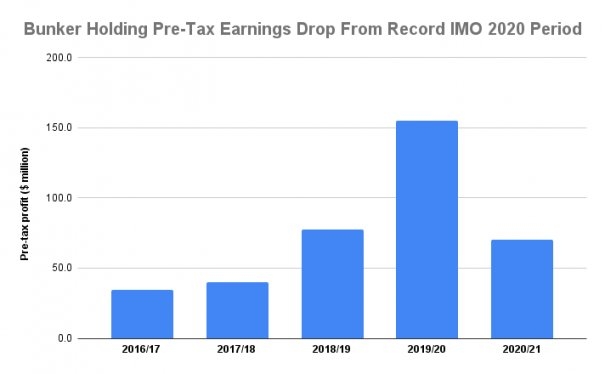 Bunker Holding expects to hang on to its current profit levels while gaining market share this year, but not to see stellar growth in its returns, Demant said.

"I think the more efficient set-up that we have now will give us a slightly increased profit -- but to expect that we'll get back to the 2019/20 level, no, unfortunately I don't think we'll see that," he said.

In aiming to take further market share, Bunker Holding will be facing increased competition from commodity trading firms seeking an increased presence in bunkering. Vitol and Hartree have been the latest firms to announce new marine fuels brands, following in the footsteps of Mercuria and Trafigura.

Over my 23 years here, I've seen them come and go.

But Demant does not yet see a significant threat to his business from these firms, as in his view they will largely be targeting a somewhat restricted customer base of the biggest customers at the biggest ports.

"We have seen quite significant change to the competitive landscape," he said

"We've seen names that have been on the top 10 lists for many years disappear, and we've seen new players entering.

"The commodity trading houses that have come in, you could call them mini-majors; I see them as taking over part of the value chain.

Another challenge for Bunker Holding is to start to position itself in the alternative fuels market which may come to dominate the bunker industry in the coming decades. The company's chief operating officer, Christoffer Berg Lassen, has said it will aim to be a 'one-stop shop' for shipowners seeking any type of marine fuel.

The company is open to multiple possible strategies to make that happen, Demant said.

"Whether our future set-up towards alternative fuels will be via organic expansion within the group or potentially via acquisitions, or perhaps a combination of the two, is still too early to tell," he said.

The complete carbon-neutral set-up is quite some years in our future.

"In terms of the technical aspects of delivering quality fuels, we want to make sure that any solution we bring to market has been tested first, so our technical department would have been part of this.

"It is great assets that we supply and very price-intensive assets, so we have to be very careful and make sure that they're ready."

The company is also not ruling out its involvement in any fuel type at this stage.

"There is a lot of talk about alternative fuels, and I think we should all be realistic to say this will be a transition where we will actually see the fossil product go on for many years.

"We will, however, all of us in the value chain, positively work towards a more green alternative.

"That can be in the medium term either LNG or biofuels, and in the long term, I think it's too early to actually be precise and predict what is coming.

"What we know is that huge investments, a lot of research and not least a lot of planning for the integral infrastructure behind it is needed.

"I do foresee that the complete carbon-neutral set-up is quite some years in our future."

As part of that transition, the prospect of a form of carbon taxation hitting the bunker industry's customers looks an increasingly likely prospect in the coming years, at the regional level if not at the global level through the IMO. The industry should prepare for this possibility by thinking of it in a similar way to a dramatic rise in the crude price, Demant suggested.

I do hope that we'll see the same rules worldwide.

"Definitely it will have an impact," he said.

"I do think that those commodity traders and a few big players will benefit from whatever will happen there.

"I guess it was also the reason that some of the big boys have been saying, 'we think this is the right solution'."

Bunker Holding itself will not be setting out a position on whether it supports carbon taxes for shipping, preferring to stay away from the political fight. But Demant hinted that his company would find it easier to work with a regulation at the global level, rather than regional measures.

"We don't go into that kind of political question," he said.

"We do support that shipping, like the rest of the world, has to go towards a greener profile.

"What means to that end -- I'll leave that to the politicians, I think they know better what will happen.

"The only thing I wish for is a level playing-field, so I do hope that we'll see the same rules worldwide."

The charter was launched in 2019 covering just the property and construction businesses, but has since expanded to covering companies from all sectors.

The firm has finalised the purchase of IK Investment Partners' stake in VPS.

The firm is looking for candidates with at least five years of experience in global marine lubricant sales.