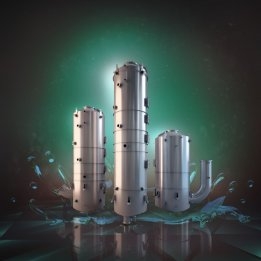 Engineering company TECO 2030 has announced its Future Funnel range of scrubbers has been expanded to include hybrid and closed-loop versions.

The Future Funnel scrubber removes sulfur and nitrogen emissions, and the company intends to upgrade it in future to handle particulate matter and black carbon, and ultimately to include carbon capture and storage technology.

The addition of hybrid and closed-loop models will assist owners working in areas where open-loop models cannot be used, the company said in a statement on its website on Wednesday.

"The closed loop system is primarily used for vessels operating in areas where discharges overboard are prohibited, and the alkalinity of the seawater is low," TECO 2030 said in the statement.

"The exhaust gases are washed on board, and substances are collected in a separate tank on board, which is emptied into ports for appropriate further treatment.

"The hybrid system can be used as either an open or closed loop, depending on the requirements and rules of the geographical location.

"This system gives the shipowner a more flexible control of emissions and environmental impact."

Several countries and port authorities now ban the discharge of washwater from open-loop scrubbers in their waters, meaning these models cannot be used in these areas. This trend has been an operational irritant to shipowners with scrubber-equipped tonnage, but has apparently not had a significant impact on the financial case for using scrubbers.

The 6,000 m3 LNG distribution and bunkering vessels will be built in China by Taizhou Wuzhou Shipbuilding Industry Co.

Group wants to highlight polluting nature of fuel oil at the event.

Clarence Chang Peng Hong, who was sentenced to four and a half years by Singapore court, is to lodge an appeal.