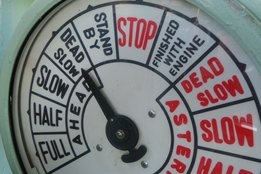 IMO's latest GHG Working Group meeting in London this week has edged towards taking measures that would reduce the speed of ships, although a decision on exactly how it will achieve this has been left for another day.

The main proposals considered by the Group centred around limits to both the speed and power of ships, but the week ended with delegates only deciding to favour a goal-based approach to its CO2 reduction efforts.

there was no appetite for prescriptive speed reduction regulation

The lack of concrete decision making left proponents from sides with hope their preferred approach will win though.

The UK Chamber of Shipping, who is strongly opposed to speed limits, today said that after lengthy discussions by the Working Group "it was clear that there was no appetite for prescriptive speed reduction regulation."

CSC member Seas at Risk, meanwhile, took heart from the fact there was "widespread acceptance by IMO member states and industry that ship speed is one of the most important factors affecting GHG emissions", and noted its proposal was one of the operational measures to be taken forward.

Critics of power reduction proposals also feel IMO yesterday was shown compelling evidence that they will not work as intended, but IMO must also consider evidence to suggest hard speed limits will also not have the desired outcome.

The merits of both approaches will now be discussed at IMO's next meeting on the matter in March 2020, but however that eventually plays out it does now seem the industry is heading towards slower vessel speeds as a result.

"All delegations admit that what all technical and goal based proposals are really about is reducing ship speeds," James Gamble, Arctic Program Director, Pacific Environment, said following the conclusion of this week's meeting.

"We would be well served to directly regulate speed as the simplest and most effective solution."

The company is looking for candidates with at least two years of experience in a corporate treasury function or the financial sector.

TECO 2030, Umoe Mandal and BLOM Maritime are working to develop a hydrogen fuel cell-powered vessel that can carry 200-300 passengers at speeds above 35 knots over long distances.