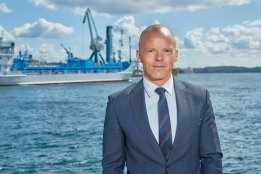 Global supplier Monjasa, which reported year-on-year bunker volumes growth in every month of 2020, is seeing further gains in market share this year but acknowledges weaker prospects for profits.

In 2020 I think everyone in the industry has been on a bit of a rollercoaster.

"In 2020 I think everyone in the industry has been on a bit of a rollercoaster," Svend Mølholt, chief operating officer at Monjasa, said in an interview with Ship & Bunker last week.

"The whole industry went through the IMO transition to begin with, and we went from there into lockdown and pandemic and global trade disruptions."

Monjasa's volume gains last year came at a time of a considerable contraction for the global industry in the wake of the COVID-19 pandemic. Global volumes at the world's leading bunker hubs sank by 6.3% on average last year, according to Ship & Bunker and BLUE Insight's quarterly market survey.

Overall the larger bunker companies like Monjasa are likely to have fared better than smaller firms in 2020, with deeper pockets to hold onto market share during the nadir of the shipping industry's standstill in the second quarter, and with some customers seeking out the bunker industry's more familiar suppliers to avoid financial turmoil. But Monjasa's growth in both volumes and profits in a difficult year nevertheless appears a significant achievement.

For comparison, World Fuel Services reported income from its marine division in 2020 was down by 12.8% on the year at $58.5 million, while marine sales volumes sank by 16.4% to 17.5 million mt. The Bunker Holding brands and Peninsula Petroleum have yet to report 2020 results.

Unsurprisingly, the IMO 2020 transition played a large role in Monjasa growing its profits last year. During the first quarter of 2020, while VLSFO blending recipes and supply chains were something of an unknown quantity to bunker buyers, suppliers were able to impose a hefty delivery premium for the new fuels and saw healthy profits as a result.

In the transition period where we were well-prepared, we made a decent part of our overall profits.

"Obviously in the transition period where we were well-prepared, we made a decent part of our overall profits, but there's also been profitable quarters after that," Mølholt said.

With IMO 2020 out of the way and global volumes not yet back up to the level seen in 2019, Monjasa expects to see weaker profits this year.

"As markets started stabilising after Q1 last year and the global pandemic kicked in, what we've seen in general is that there is less volume in the market, and that obviously impacts margins when competition remains the same," Mølholt said.

"We believe that we will do well on volumes and increase our overall market share footprint, but with margins under pressure across the industry, we do believe that it's going to be south of what we were able to deliver last year.

"Putting a final number on it is difficult at the moment because of not knowing how vaccines and expected economic recovery will impact overall demand and shifts in trading patterns." 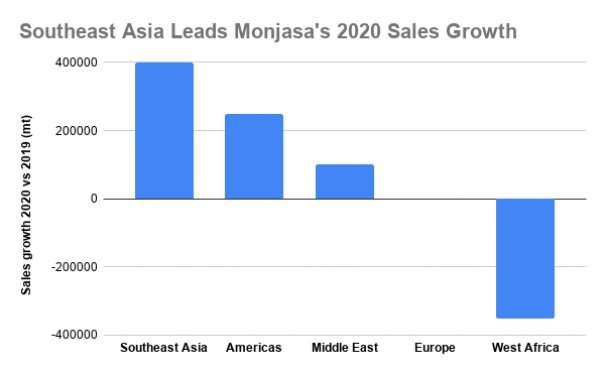 In the geographical breakdown of sales volumes in Monjasa's annual report Southeast Asia was the clear winner in 2020, with an 80% gain to 900,000 mt. Total sales volumes in Singapore grew by 5% last year, according to the Maritime and Port Authority.

Monjasa is not likely to use that growth as a springboard to join Singapore's list of 43 licensed physical suppliers any time soon, according to Mølholt.

"That scale we've built out there allows us to work much closer and more strategically with the supplier side," he said.

"But it is still a market that delivers some 4 million tonnes plus a month and where there's more than 40 different suppliers, and there's numerous barges.

[Singapore is] a saturated and very well-regulated market.

"It's a saturated and very well-regulated market you have out there on the physical side.

"We've built further scale out there, but is it enough for us to start a physical operation where we can make a real difference? We don't see that just yet."

Singapore was also not the only source of the company's gains in Southeast Asia last year.

"We are also seeing growth in areas like China and Malaysia, so it's not just Singapore -- or Vietnam, where we most recently opened an office."

Another area of note was the Americas, where Monjasa cited 'high activity levels in the Panama Canal' as being behind its 22% sales volume growth. Total demand in Panama sank by 11% last year, according to the Panama Maritime Authority.

The quality and efficiency and the professionalism we've brought into the canal -- we see significant demand for that.

"Looking back a few years, we started building our physical position over there, started up in a partnership with physical suppliers, and then little by little, we've been moving our own vessels over there," Mølholt said.

"Now in total, we operate and deliver from some four tankers and barges in the canal.

"What we've really seen is that the way we operate and the tankers we bring in, which are relatively younger than the market average and much more efficient, there's a demand for that.

"The quality and efficiency and the professionalism we've brought into the canal -- we see significant demand for that."

Monjasa announced it had moved one of its bunker tankers from Dubai to Panama earlier this year, with the aim of providing bunkers to larger vessels waiting at Cristobal to pass through the canal.

Monjasa's performance in West Africa was much weaker last year, with sales dropping by 25% to 1.05 million mt and the region being overtaken by the Americas as the company's biggest sales focus. Total bunker volumes in West Africa dropped by 22% last year, according to the Ship & Bunker/BLUE Insight quarterly survey.

"We've been there for more than 10 years and delivered more than 10 million tonnes there, and throughout the years competition has come and gone," Mølholt said.

"What we see over 2020 is that we maintained our market position in West Africa.

"The trading patterns have changed, and the general activity levels are down, and that's what's impacting the volume that's delivered there, but our market position remains the same.

"We're there for the long run."

Monjasa lists its top 10 supply areas in its annual report, and the English Channel appeared in it for the first time in 2020, taking eighth place.

Monjasa has in recent years suggested the English Channel ports could be considered a niche alternative to the nearby ARA hub. The area's arrival in Monjasa's top 10 list is partly down to the wide geographical range of operations that the company defines it as covering, Mølholt explained.

"We use that [the English Channel] in supplying all the way from France to the west side of the UK all the way up to Scotland; this is an operation that covers a relatively large area," he said.

"That's why you see it climbing into the top 10.

"We are seeing more and more demand in and around the English Channel.

"What we've seen is it's a really good position and starting-point to supply in a relatively large area with the logistics that we have over there."

A perennial question for all conventional bunker suppliers is when the alternative fuels space will become attractive enough -- or threatening enough -- for them to seek to play a role in it.

Peninsula Petroleum gave its answer to that question earlier this year, launching an LNG bunkering business. But Monjasa is not rushing to follow suit, Mølholt said.

"At the moment, alternative fuels are a small percentage of the overall demand for energy or fuel," he said.

"We hope to be able to support the transition to alternative fuels, but that continues to be an upstream task in developing those to be more ready for mass consumption and distribution.

"What we looked at at the moment to support this transition is to find companies that are investigating and developing in the sphere of alternative fuels to see how we can advise on the logistical side of these opportunities to make it something that's more readily available for the shipping industry.

"That's where we're putting in our efforts at the moment.

"At a later point, that could obviously translate into new logistical setups, be that on LNG or ammonia or something else.

"But at the moment, we think where we can make the largest impact is by spurring and helping out on what the logistics of alternative fuels looks like."

Ardmore to Expand Use of FuelOpt System After Successful Trial

Ardmore had tried out the system on board its MR tanker the Ardmore Sealion last year.