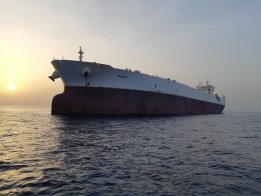 The Oceania, on board which Euronav is holding its fuel oil stockpile, is one of the largest oil tankers in the world. Image Credit: Euronav

Belgian shipping company Euronav, after reporting a $56 million paper loss a few months ago from the price of its very low sulfur fuel oil (VLSFO) stockpile crashing, is now building up its hoard again.

The company is currently buying about 20% more than its fuel consumption needs, in order to bring the average value of its stockpile closer to the current market price, Hugo De Stoop, CEO of Euronav, said in an investor call Thursday.

In 2019 the company bought 420,000 mt of fuels compliant with the International Maritime Organization's new 0.50% sulfur cap and stored them on its giant tanker the Oceania, in anticipation of VLSFO prices rising sharply in early 2020.

By March 31, after that month's crash in crude and fuel prices, the company had stopped burning the fuel in favour of buying cheaper product from the market. The value of the remaining 220,000 mt the company had in storage was $56 million lower than what it had paid for it, it said in first-quarter results earlier this year.

By the release of its second-quarter results on Thursday, the situation had changed markedly, with the company now holding 275,000 mt of product worth $32 million less than its purchase price.

By increasing its inventories now, the company is "averaging down the cost of inventory," De Stoop said.

The company had previously said it had paid about $447/mt on average for the stockpile built last year.

"Today we would be below $400, thanks to this policy of buying more," De Stoop said.

"We will continue doing that, and we believe that by the end of the year, the Oceania will either be empty, or full of fuel oil at a price that is identical to the market."

As well as helping the company with its accounting, VLSFO bought today may prove significantly more valuable in future if oil markets show a more pronounced recovery towards the end of the year.

But with some of the long-term stability concerns over VLSFO kept in storage, the company will need to be managing its inventories carefully to make sure it is still in a usable state when bunkered onto an active ship.

The company has signed a memorandum of understanding with Japanese power supplier Jera Co to collaborate on a wide range of decarbonisation projects.