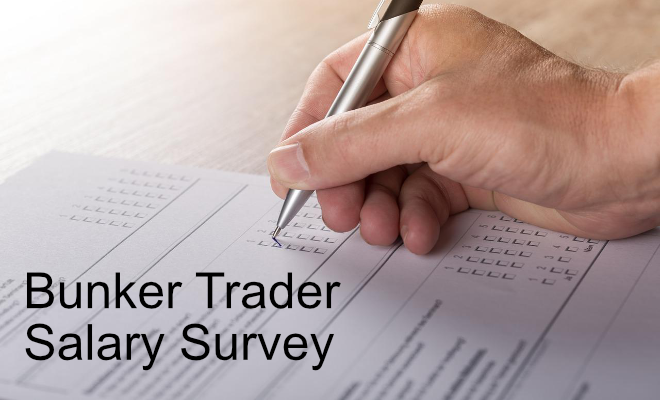 Here Are the Results of the 2022 Bunker Trader Salary Survey

Like many industries, salary is a key factor that can make some in the bunker industry feel good about their current position, and for others it is the driver to look for a new role.

With the bunker job market currently thriving, Ship & Bunker has teamed up with recruitment specialists Imperium Commodity Search to help paint a picture of the current global salary landscape for bunker traders.

The following data has been compiled from over 250 individuals, and includes both responses to a recently held survey on Ship & Bunker plus data from actual industry placings made by Imperium. All salary data has been converted into USD at prevailing conversion rates.

The global average base salary for bunker traders currently sits at just under USD $100,000/year - $96,912 to be exact - with some notable variance based on location.

As might be expected, the least experienced personnel attracted the lowest average salaries - a little over $56,000 on average - and base salaries rose according to the level of experience up to an average of over $130,000 for those with 15+ years in the industry. 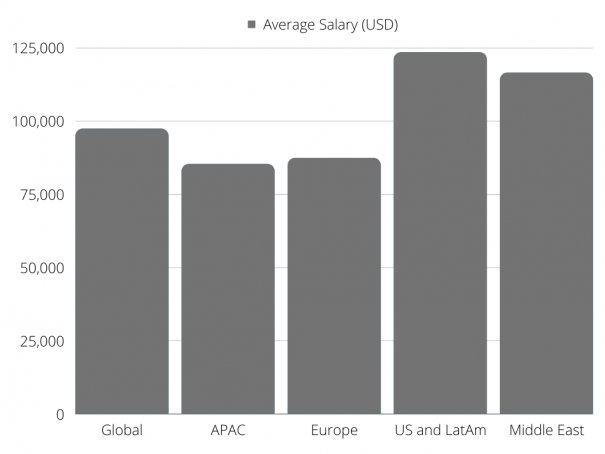 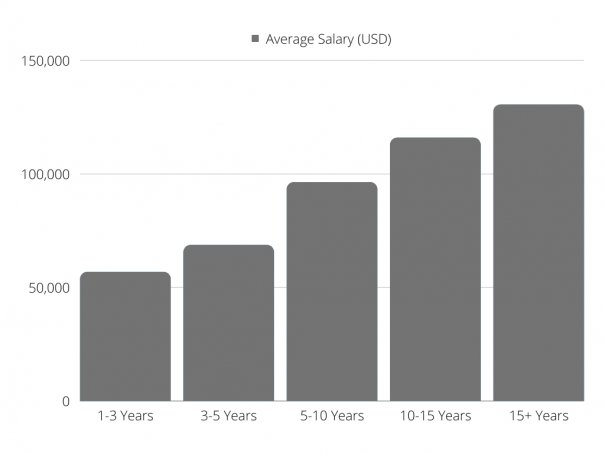 Bonuses play a big part of the bunker industry's pay structure, and this lifts overall pay in line with experience. The blow graph shows the compound of average base salaries plus bonus payouts for differing experience levels. 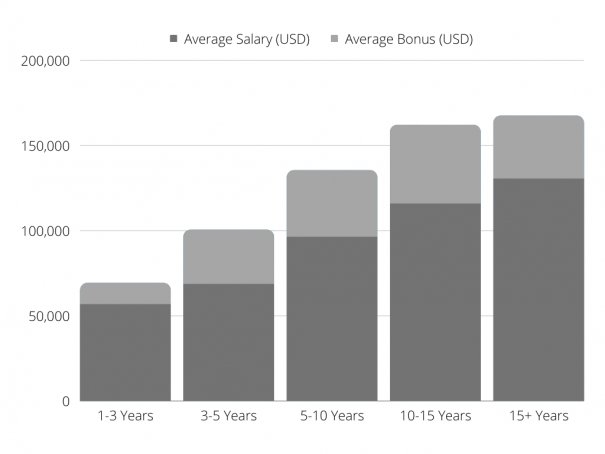 Like many things in the post-COVID world, the bunker job market is changing and there is more going on behind the scenes than the above graphs reveal.

"We are seeing the growth of a two tiered salary system where traders in post since pre-covid are generally sitting on a lower salary than those who have been on the move since," says Imperium Managing Partner Mark Taylor.

"With increased competition in hiring there has been a marked increase in the base salary offered to new traders and this gap between old and new continues to widen in some trading houses. Others have dealt with the matter through accelerated contract renewals and salary bumps for existing staff but many still lag behind."

Often more important than the actual salary amount is how a person feels about their pay in relation to the market. Over half of the participants of the survey felt their pay was below market rate, and just 13% believed it was above market rate. Readers should, however, keep in mind that those who have a negative view on their salary may be disproportionately represented in this data as they may also have been more compelled to complete the salary survey and / or be actively looking to place into new roles. 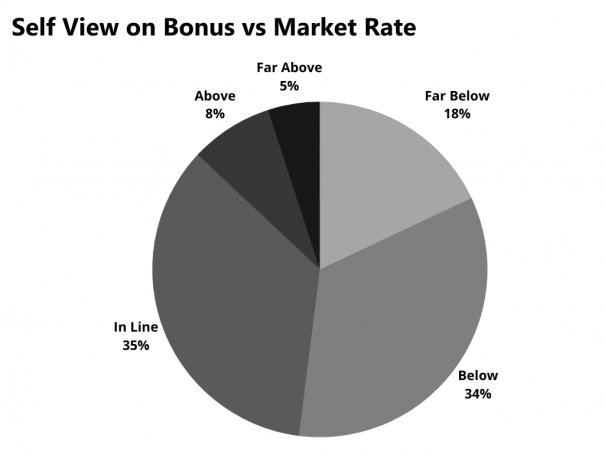 Indeed, looking at just those who completed the survey - that is, excluding those who have just been placed into new roles by Imperium - 42% said they were looking to move within the next 12 months.

While 52% of respondents said their salary was the most important factor for them in their job, 39% said it was work-life balance - far more than job security (5%) or all other factors (4%). 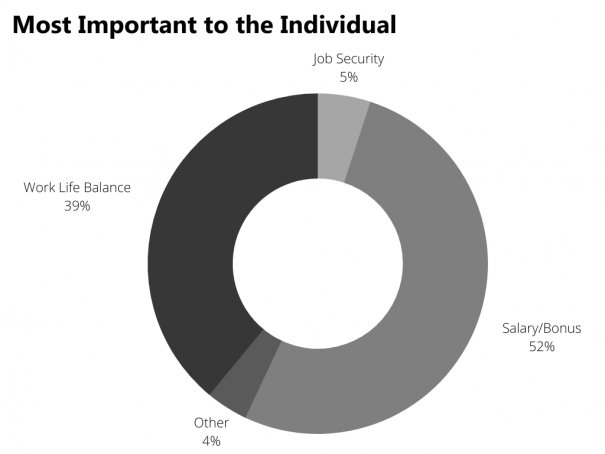 For those who are on the hunt for a new position, Imperium Principal Consultant, Josh Clark, says the bunker job market in 2022 continues to be strong.

"After we saw the market begin to recover from the impacts of Covid in early 2021 this shifted to a volatile candidate led-market with a number of companies looking to expand their desks with experienced, profitable traders. In the case of a couple of larger suppliers and trading houses offering new operations and building trading teams in new geographies to increase market share.

"We have seen a shift coming to mid-2022 with Global firms identifying the opportunity to create Trading programs to bring fresh talent into the industry as the increase of transparent trading platforms and new technology is being pushed into the market. The market has seen some difficult weeks with pricing issues due to the Russia / Ukraine crisis, however this has provided the market with increased volatility in some cases providing traders with strongest monthly revenues they have seen since Covid."

Taylor, meanwhile, notes that certain geographical regions are in more demand than others. Likewise, not all experience levels are in equal demand.

"London has been quite active which has made a difference, including with some junior/entry level opportunities. Europe as well has been quite strong. We are starting to see more movement again in Singapore and the US but Europe has led the way in activity in recent months," he says.

"In terms of experience level, the mid-market has been toughest with opportunities for entry level juniors and experienced book-bringers remaining high. Mid-market candidates with a modest book are likely finding things hardest right now."

Imperium Commodity Search has been built from the ground up to provide a bespoke partnering service to assist commodities, global markets and shipping firms in hiring the best talent in the market. With the resources of an agency and the approach of a headhunter, we ensure our candidates are introduced to exceptional clients that share the same beliefs and aspirations as they do.

Built upon a global network and personal relationships with commodity firms internationally, our commodity headhunters have built a reputation for extracting talent that is not only the right professional fit, but the right cultural one too.

We believe in attraction and retention in equal measure. We operate on a strict framework to ensure we get to know our candidates and clients in a way that ensures the relationships we help create are lasting and beneficial to all involved.

Our consultants operate within their own niche, providing specialist advice to clients and candidates alike. We set ourselves apart in the introductions that we don’t make and strongly believe in partnering with clients that share our care in the recruitment process.

Imperium Commodity Search maintains relationships with Bunker Trading / Brokering candidates and firms globally; strategically managing our relationships to ensure an ability to service our clients/candidates needs across a variety of private firms across the Marine Fuel and Lubricants space.

Our consultants have expert knowledge of the global bunker / marine fuel markets and can advise on career options as well as strategic hires in the space through both retained and contingent recruitment methodologies. Our recruitment team manage our client relationships strategically to ensure we are not bound by blanket non-poaches by global conglomerates. This means we can offer a full service recruitment solution to clients and candidates alike.