The bunker industry is at the beginning of a period of significant change. The introduction of the IMO2020 rule and the impact of measures taken in response to the Coronavirus pandemic mean major shifts ahead for key market dynamics such as credit and compliance requirements, suppliers' market share, and bunker buying patterns.

In the medium and longer term, the need to meet IMO2030 and IMO2050 GHG targets will usher in a wider era of transition for marine energy, prompting the emergence of new players, technologies, and opportunities. 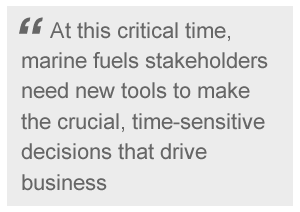 At the same time, the unrelenting rise of computing power, automation and artificial intelligence will shape the industry in ways we never thought possible, giving rise to challenges we could never have imagined facing.

This is a new era for the bunker industry.

Ship & Bunker's Bunker Intelligence is a stream of products that offer an additional level of depth to the core news and bunker pricing information we provide our readers.

A report jointly developed by Ship & Bunker and SeaCred that provides an overview, including sales volume, of our pick for the world's top 10 bunker companies. Learn More »