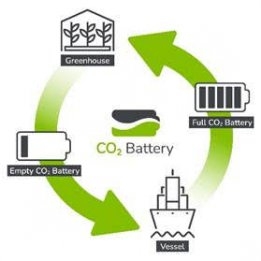 Carbon capture may extend the life of fossil fuels in marine propulsion while keeping the shipping industry to its decarbonisation targets. Image Credit: Value Maritime

An inland vessel operated by X-Press Feeders is set to be the first operational ship taking on a carbon capture and storage system.

Value Maritime will install a carbon capture and storage system on Visser Shiping's ship the Nordica in October, it said in an emailed statement on Thursday.

The system stores the carbon in what Value Maritime calls a CO2 battery, that can be offloaded at ports to transport the CO2 for use elsewhere before being returned empty to the ship. The CO2 from the ship will be used in greenhouses in the Rotterdam area.

The system can capture 'up to 100%' of the ship's carbon emissions, the company said.

"With the installation of Value Maritime's CO₂ Capture Module and CO₂ Battery, Value Maritime is the first company worldwide to install a capture and storage facility onboard of a vessel in operation," the company said in the statement.

"Class Bureau Vertitas is involved in the relevant approval of the system."

US Could Go Faster on Domestic Shipping Emissions, Say Activists

But California continues to set pace for local action.