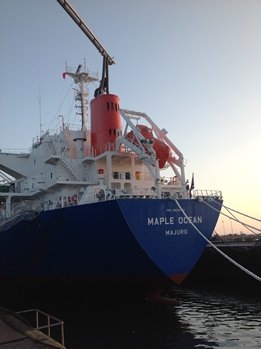 The AMECS system's bonnet placed over the exhaust stack of a ship.

The Long Beach Board of Harbor Commissioners on Monday approved $2,065,000 in funding for the demonstration of a "sock on a stack" emissions control system that could potentially allow every vessel calling at the port to virtually eliminate its at berth emissions, helping cut pollution at the port by half.

ACTI say it works by first sealing a "bonnet" over the exhaust stack of the ship, and then vacuuming ship-generated emissions through a duct to a barge mounted Emission Treatment System (ETS) where 95-99 percent of pollutants, including Nitrogen Oxide, Sulfur Oxides, and Particulate Matter, are removed.

However the AMECS technology, in theory, will be able to be used by every vessel that calls on the port.

"The idea is that any vessel, any size can come to the port of Long Beach and at any time we can capture those emissions," said ACTI spokesperson Ruben Garcia, who was at Monday's meeting.

"We'll be testing all vessel classes," he added.

The first phase of the demonstration project covering equipment installation and a "fit test" for the bonnet is expected to take 60 days.

Phase 2 of the project aims to see 1000 hours of the system in use hooked up to vessels, which Richard D. Cameron, Director of Environmental Planning, said could take 6 to 12 months to complete depending on the participation levels by the vessels.

"The significance of this $2 million contract allows the Port of Long Beach to effectively reduce port pollution in half by supporting a technology that will capture all the emissions out of a ship," local newspaper Press-Telegram quoted Dines as saying.

"This technology will not only support the Port of Long Beach in reducing emissions but for ports around the world," he said.

The Port is also spending "millions of dollars" on cold ironing technology, as upcoming California Air Resources Board (CARB) regulations mean ship operators must "plug in" half their fleet in the state from 2014.