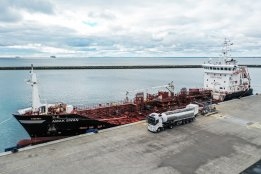 The company is seeking to hire "a strong green profile to head our green transition," Christoffer Berg Lassen, chief commercial officer at Bunker Holding, wrote in a LinkedIn post on Wednesday.

The firm is looking for 'an expert in green transitioning' with knowledge of carbon offsets and insets, biofuel, ammonia or methanol, Lassen said.

"As the world's leading bunkering company, we have the will and the power the lead the way," he said.

Bunker Holding's moves in this area thus far have been relatively modest compared to other marine fuel firms. Its most significant announcement came last month with the news that its subsidiary Bunker One would soon be setting up a biofuel supply operation around Skaw and Gothenburg.

In the meantime Peninsula Petroleum has set up an LNG bunkering business in the Mediterranean, Fratelli Cosulich is in the process of doing the same, TFG Marine has started supplying biofuels in Northwest Europe, Minerva Bunkering is offering carbon offsets to its customers and GAC Group has set an ambition of no longer selling oil-based bunkers after 2030.

The IBIA working group has already published a comprehensive assessment table for each of the main alternative fuel options on the organisation's website for its members.