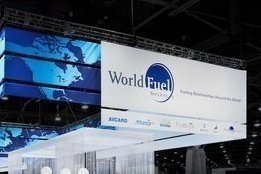 World Fuel Services (WFS) [NYSE:INT] today said 2018 is off to a "good start" as it delivered an upbeat account of its results for the first quarter.

With an overall net income for the period of $31.2 million, virtually unchanged from the $31.3 million recorded in the period last year, chairman and chief executive officer, Michael J. Kasbar, said the firm had benefitted from "seasonal increases in our land business and solid performance by our aviation and marine segments."

The company's marine segment generated gross profit of $31.2 million, a decrease of 7% year-over-year due to "the continued challenges in the maritime industry and our strategy to reduce business in certain regions where we were not generating satisfactory returns on capital."

However, the result was up $2 million or 8% sequentially, a performance said to have been "stronger than expected" and driven by increased activity in offshore business and the sale of price risk management products.

This compares to a year-on-year drop in bunker volumes of 0.9 million mt witnessed in 1Q 2017.

"The largest drivers for the volume reduction relate to our operations in the Asia Pac region and our decision to exit certain low margin or unprofitable markets which we spoke about last quarter," Ira Birns, Executive Vice President and Chief Financial Officer, explained during the company's earnings call.

Despite the continued tough conditions in marine, WFS reiterated it was committed to the segment.

"Looking ahead to the second quarter, we are cautiously optimistic about delivering another good quarter in Marine," said Birns.