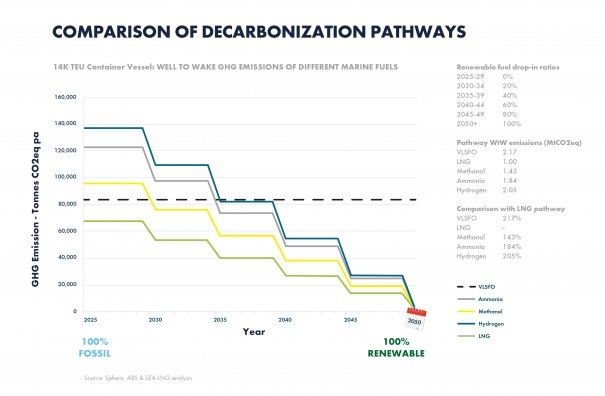 Sea-LNG argues the pathway of LNG today to bio- and synthetic LNG in future can deliver lower overall emissions than other alternatives. Image Credit: Sea-LNG

Advocates for LNG as an alternative bunker fuel are expressing a degree of frustration about a lack of support for gas-powered shipping as a decarbonisation pathway, compared with other alternatives.

At a roundtable event hosted by LNG bunkering body Sea-LNG last month, the organisation's board members set out their views on the prospects for alternative fuels.

LNG has come under sustained assault as a future bunker fuel in recent years, seen in some quarters as just another fossil fuel and a distraction from the shift to zero-carbon fuels, and several speakers at the event had a tone of disappointment that more credence was not given to the prospects of gas-powered ship investments leading to these ships using bio- or synthetic LNG at a later date.

When people talk about LNG, it's always fossil LNG.

The individuals spoke under condition of anonymity to allow for a freer discussion.

"When people talk about LNG, it's always fossil LNG," one board member said.

"All fuels that are currently being discussed share the same fossil, bio and synthetic fuel pathway.

"Looking at the LNG pathway, it's a pathway that gives you significant lower emissions."

The case for LNG bunkers as a decarbonisation choice today is based on the potential for fossil LNG to deliver lower emissions than conventional marine fuels, and then on bio- and synthetic LNG gradually becoming available over the coming decades to replace the current fossil product.

We plan to completely eliminate methane slip by 2030.

The first part of this argument is the most contentious, as LNG supporters and opponents are irreconcilable on the issue of the GHG emissions impact of using it as a marine fuel. Supporters take a 100-year view of its impact on global warming, while opponents use a 20-year view that gives greater weighting to the short-term impact of escaped methane on the atmosphere before it breaks down.

Supporters claim GHG emissions cuts of as much as 20% can be achieved by using LNG versus conventional fuels, whereas opponents claim LNG's emissions can be higher than conventional bunker fuels when used in some engines.

The difference between the supporters' and opponents' cases on this point comes largely down to the issue of methane slip, the problem of natural gas escaping during the production, transportation and use of LNG as a fuel.

One board member said this problem was largely a temporary one.

"We plan to completely eliminate methane slip by 2030," the speaker said.

"We do understand the challenge."

Beyond that, the problem will be in how soon the supply of bio- and synthetic LNG can be set up.

"Of that, up to 275 million mt/year could be used to produce biogas."

One question hanging over the gas-fuelled shipping market is whether enough is being done to stimulate the scaling-up of supply by making demand commitments.

Container line AP Moller-Maersk has expressed its intention only to order ships capable of running on zero-carbon fuels in future, and to run its methanol-fuelled ships arriving this decade on green methanol within a year or two of their delivery.

France's CMA CGM by contrast -- one of the biggest supporters of LNG as a bunker fuel -- has yet to commit to a deadline for when it will run its gas-powered ships already in operation today only on bio- or synthetic LNG.

Overall, the argument presented by most speakers was that LNG should be presented in a similar light to other alternative fuel pathways -- as an option with significant technological and other challenges, but solvable ones.

"Our common challenge is producing enough renewable electricity and electrolysis capacity to produce the hydrogen building block," a speaker said.

"75-80% of the cost of these synthetic fuels is associated with the cost and the challenge of producing hydrogen."

The facility will use green hydrogen and CO2 to produce up to 2,100 mt/year of a synthetic drop-in fuel.