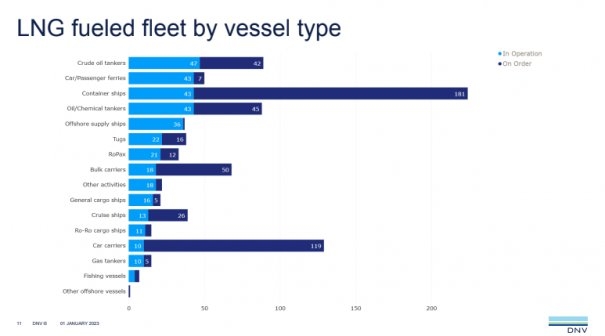 A total of 222 LNG-fuelled ships were ordered last year, down only slightly from 2021's record total despite surging LNG bunker prices, while ships capable of running on alternative fuels took up 30% of total orders by tonnage.

2022's total of 222 LNG-fuelled ship orders was down by 7.5% from the 240 ships ordered in 2021, classification society DNV said in an emailed statement on Wednesday. 74% of 2022's orders were for container ships and pure car and truck carriers, and 9% were refined product tankers.

While the LNG bunker industry may be relieved that the decline was restrained to a single-figure percentage one, it still represents a significant change from the exponential growth seen in previous years. 2021's order total was more than the previous four years combined.

That growth might have been expected to continue without this year's record surge in LNG bunker prices. LNG priced in fuel oil terms at Rotterdam averaged $1,802.50/mt last year, according to Ship & Bunker data, up by 138.7% on the year, while VLSFO at the Dutch port gained 44.3% to $735/mt.

"A diverse portfolio of LNG-fuelled ships was delivered in 2022, with large crude oil tankers in the lead and container ships in second place," Martin Wold, principal consultant in DNV's Maritime Advisory business, said in the statement.

"Far from all are currently operating fully on LNG fuel, but there are geographical pockets where LNG is still competitively priced and being bunkered regularly.

"The underlying growth for LNG fuel is nevertheless very strong and the market will likely return with a boom at some point, with bunkered volumes expected to triple within a very short time span."

2022's count of 222 LNG-fuelled ship orders took up the majority of the 275 orders of ships with alternative-fuel propulsion systems, excluding battery systems, according to the DNV data.

Looking at total tonnage ordered in 2022 rather than the outright number of ships, 30.19% of the total was capable of running on alternative fuels, according to the DNV data. 17.6% by tonnage was LNG-fuelled, 12.11% methanol-fuelled and 0.49% LPG-fuelled.

The company is looking for candidates with experience in oil and gas operations, bunker barge operations or shipping.

After a cyberattack on the evening of January 7, DNV has shut down the ShipManager servers.