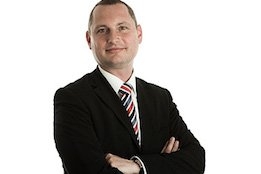 Nicolai Bro Jöhncke of NORDEN says "the added cost of the sulfur regulation will be significant and without robust enforcement."
Image: NORDEN

Nicolai Bro Jöhncke, Director – Head of Corporate Communications & CSR at Dampskibsselskabet NORDEN A/S (NORDEN) has told Ship & Bunker that the company has joined Trident Alliance - a move that will lend support to NORDEN's push for fair competition within the shipping industry in the context of tightening regulations on sulfur in bunkers.

"The added cost of the sulfur regulation will be significant and without robust enforcement of compliance across the industry, the new sulfur limit will distort fair competition," said Jöhncke.

"NORDEN already advocates level playing field through strong enforcement and membership of the Trident Alliance serves to underline this."

In September, Ship & Bunker reported that the Trident Alliance had said that the implementation and enforcement of emissions control area (ECA) regulations remains "patchy," and that there remains a "sea of question marks" over the enforcement of the impending 0.50 percent global sulfur cap.