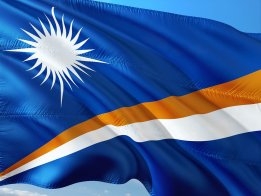 The government of the Marshall Islands has been at the forefront of calls to impose tougher emissions regulations on the shipping industry. File Image / Pixabay

The governments of the Marshall Islands and the Solomon Islands have called for a $100/mt carbon price to be imposed on the shipping industry to encourage decarbonisation and to help fund climate change mitigation efforts.

The proposal has been submitted to the International Maritime Organization.

"The proposal would establish a mandatory, universal GHG levy with an entry price of $100 per tonne/CO2e with regular upward ratchets following review," Albon Ishoda, the Marshall Islands' ambassador to Fiji, said in a press release on Thursday.

"It would provide a clear signal to the market and all industry actors of the shipping industry's commitment to decarbonization at requisite speed and scale, and it would also help to make decarbonized shipping fuel and technologies cost competitive with business-as-usual (BAU) emission-based technology options.

"The majority of the funds raised from the levy would help climate vulnerable countries like ours meet different climate change adaptation and mitigation needs.

"Another portion of funds would be directed to subsidize the research, development, and deployment of new technologies and fuels administrated under the mandate of the IMO."

Several industry voices have noted that market-based measures will be needed to kick-start the shift to decarbonisation for much of the shipping industry, but the IMO has yet to agree such measures at the global level. European regulators have become impatient with slow progress at the IMO, and are seeking to introduce shipping to the EU's emissions trading scheme at the regional level instead.

Meanwhile, U.S. demand for gasoline appeared to be waning.

The company is looking for candidates with a strong commercial focus and the ability to build relationships with key stakeholders.

The company is looking for candidates with a relevant educational background and experience from a similar position.