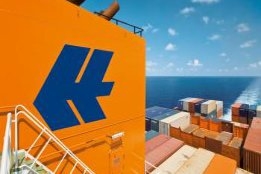 Hapag-Lloyd today ensured it will be a Merry Christmas for LNG bunker advocates by announcing it has ordered six ultra large container vessels that will be powered by natural gas.

It will rightly be seen as one of the most significant announcements for the emerging LNG bunker industry in years, with the firm following in the footsteps of fellow box carrier CMA CGM who was the first to go gas for its mega ships with an order of nine 23,000 TEU vessels at the end of 2017.

At the time, CMA CGM's order was so significant for the LNG bunker supply market that the ships' estimated 300,000 tonnes annual LNG fuel requirement was the equivalent of 75% of 2017's total LNG bunker demand of 400,000 tonnes.

Things have moved on incrementally since then so the impact of Hapag-Lloyd's order on LNG bunker demand will not be quite as dramatic, but it is nevertheless another major sign that the alternative fuel is set play a meaningful role in the marine fuel mix of the future.

In a press release issued today, Hapag-Lloyd said its dual-fuel vessels will be a hair bigger than CMA CGMs at 23,500+ TEU capacity and will be delivered between April and December of 2023.

They will be constructed by Korean ship yard Daewoo Shipbuilding & Marine Engineering (DSME).

The order represents a USD $1 billion USD investment, financing for which has already been secured.

With much of the debate around LNG bunkers focused on its green credentials - or lack thereof according to sceptics - Rolf Habben Jansen, CEO of Hapag-Lloyd, indicated the environmental aspect of the order might not as important as the cost savings that the bigger ships will bring.

Hapag-Lloyd also made it clear that the "extremely fuel efficient" vessels will have sufficient tank capacity to operate on conventional fuel.

"With the investment in six ultra large container vessels we will not only be able to reduce slot costs and improve our competitiveness on the Europe – Far East trade, but also take a significant step forward in modernizing our fleet," he said.

"Additionally we will further reduce our environmental impact."

Hapag-Lloyd is the world's fifth largest carrier by capacity with 7.1% of the market, according to Alphaliner data.

First two pure car and truck carriers to be delivered in 2024.