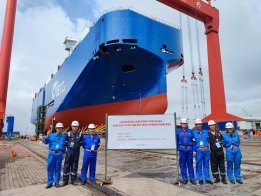 The ship is the second in a series of three hybrid LNG-battery car carriers. Image Credit: UECC

The second of UECC's three new hybrid LNG- and battery-powered pure car and truck carriers has launched in China.

The ship was launched at Jiangnan Shipyard this week a year after steel was first cut on the vessel, UECC said in an emailed statement on Thursday.

The ship is due for delivery in the first half of 2022, following its sister vessel later this year.

The shaft generator on the ships allows them to recharge batteries while at sea, allowing them to run their bow thrusters in or out of port on battery power only.

"There have been a number of technical challenges to overcome, such as streamlining the shaft generator for a dual-fuel engine and determining whether the bow thruster could run on battery power when entering and leaving port," Jan Thore Foss, head of ship management and newbuilding at UECC, said in the statement.