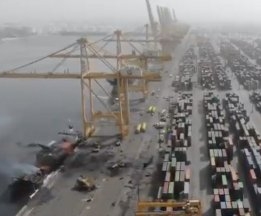 The fire was put out within 40 minutes. Image Credit: Jebel Ali Port

A fire was reported on Wednesday on a container ship at Jebel Ali.

A container on a ship at the UAE port caught fire on Wednesday, the port authority said on Wednesday. The fire was put out within 40 minutes.

"Prudent action ensured that operations were not affected in any way due to the incident, which occurred in the older Terminal 1, used for small ships," the port authority said in the statement.

"Terminal 2, 3 & 4 of the Port, where big ships dock & offload their cargo, continued normal operations even during the incident."

The port authority is now investigating the cause of the fire.

The organisation will help port authorities find suitable locations for LNG bunkering facilities and set them up.

The company has had the system installed on its chartered barge the Queensway Vemahonesty.

The company has ordered three 85,000 DWT Kamsarmax bulk carriers capable of being converted at a later date to run on unspecified alternative bunker fuels.