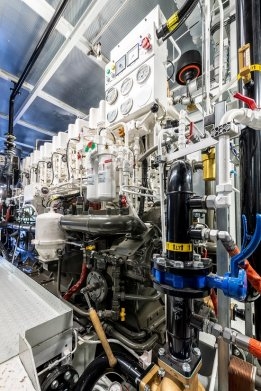 The company is seeking to build as many as 100 engines per year. Image Credit: BeHydro

A Belgian joint venture has launched the first hydrogen-powered dual-fuel engine with a capacity of 1 MW.

BeHydro, a joint venture between Belgian engine manufacturer ABC and shipping and logistics group CMB, has been developing, producing and testing the engine over the past three years, the company said in an emailed statement Thursday. The commercial launch of the first engine will lead to it being able to produce engines of up to 10 MW in capacity.

The company has already received its first order, for two 2 MW dual-fuel engines to be installed on board the tugboat Hydrotug at the Port of Antwerp, it said.

BeHydro is developing a single-fuel hydrogen engine that will be ready by the second quarter of 2021, it said.

"BeHydro reinforces the recently announced EU vision on hydrogen and proves that the energy transition for large-scale applications is possible today," Alexander Saverys, CEO of CMB, said in the statement.

"These include main engines for coastal shipping, inland shipping and tugboats, auxiliary engines for deep-sea vessels, but also trains and electricity generators for hospitals and data centres.

"In theory, any large diesel engine can be replaced by a BeHydro engine."

The company has already received its first order, for two 2 MW dual-fuel engines to be installed on board the tugboat Hydrotug at the Port of Antwerp.

Shipping crews may not be aware of their responsibility for monitoring bunker sampling procedures.