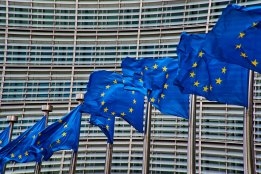 The EU is moving closer to charging the shipping industry for its GHG emissions. File Image / Pixabay

The European Commission has formally proposed its long-mooted plan to include shipping in the EU's emissions trading system, charging the industry for its carbon emissions.

"The principle is simple: emission of CO2 must have a price – a price on CO2 that incentivises consumers, producers and innovators to choose the clean technologies, to go towards the clean and sustainable products," Ursula von der Leyen, president of the European Commission, said in a statement announcing the new policy.

"And we know that carbon pricing works.

"Our existing Emissions Trading System has already helped significantly to reduce emissions in industry and in power generation.

"So we will strengthen the existing system in these sectors.

"And we will make Emissions Trading System applicable to aviation and extend it to the maritime."

The proposals now need to be passed by the European Parliament and the EU Council. This process may take as long as two years, price reporting agency S&P Global Platts reported on Wednesday.

The plan has attracted criticism from some quarters on the basis that the EU's regional approach to addressing shipping's emissions may undermine the global work under way at the IMO.

"Other than as an ideological revenue raising exercise, which will greatly upset the EU's trading partners, it's difficult to see what extending the EU ETS to shipping will achieve towards reducing CO2, particularly as the proposal only covers about 7.5% of shipping's global emissions," Guy Platten, secretary general of the International Chamber of Shipping, said in a statement on the industry body's website.

"This could seriously put back climate negotiations for the remaining 92.5% of shipping emissions.

"It cannot be equitable for non-EU shipping companies to be forced to pay billions of euros to support EU economic recovery plans, particularly under a scheme that undermines CO2 negotiations."

"Now lawmakers need to defend a carbon market that covers extra-European voyages, so that the biggest shipping companies are not let off the hook.

"The ETS revenues should be reinvested in deploying zero-emission vessels, port charging, and hydrogen refuelling infrastructure."

However, signs of demand destruction are equally compelling.