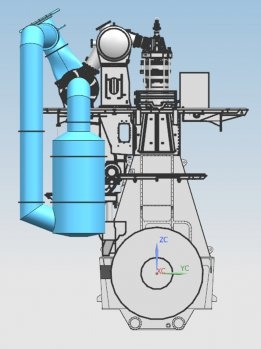 Engine manufacturer WinGD has developed an exhaust recycling technology that can reduce fuel consumption and methane emissions from its X-DF duel-fuel engines, the company said Tuesday.

The system "delivers enhanced combustion control through the use of inert gas," the company said in an emailed statement. This can deliver a reduction in methane slip of up to 50% when using LNG, as well as a 3% cut in fuel use while using LNG or 5% when using conventional bunkers, it said.

"By adjusting the recirculation rate of inert gas and controlling parameters like fuel admission and ignition timing, we can increase compression ratios for greater efficiency," Volkmar Galke, global director of sales at WinGD, said in the statement.

Methane slip is one of the biggest limitations holding back the use of LNG as a bunker fuel; because any methane leaked from a vessel has a much greater global warming impact than carbon dioxide, it significantly tarnishes the green credentials of LNG.

Production at Honda's Swindon plant has been halted on Wednesday because of 'transport-related parts delays'.