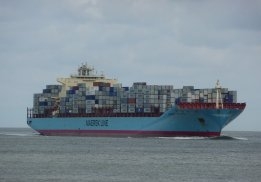 Maersk currently has about 296,100 TEU of methanol-fuelled container ship capacity on order -- in 19 ships of various sizes -- for delivery before 2025. File Image / Pixabay

Container line AP Moller-Maersk, one of the world's largest consumers of bunker fuel, plans to ship a quarter of the cargo it carries using green fuels by the end of the decade.

The company's target is to transport a minimum of 25% of its ocean cargo using green fuels by 2030, it said in an ESG presentation to investors on Tuesday.

The firm's current fleet capacity is 4.25 million TEU, according to container intelligence provider Alphaliner. Maersk currently has about 296,100 TEU of methanol-fuelled container ship capacity on order -- in 19 ships of various sizes -- for delivery before 2025.

That amounts to about 7% of its current fleet capacity. If the company is to meet its new 2030 target using methanol-fuelled tonnage, it could need to order another 45 17,000 TEU ships with methanol propulsion for delivery before 2030, as well as set up production deals to secure the necessary fuel supply.

The firm has specified only 'green fuels' for its target, and this wording could allow it to take on biofuel bunker blends for part of its fleet if scaling up methanol in time proves too difficult before 2030.

But over the longer term the company will still need a rapid shift into zero-carbon fuels, with a 2040 target of net zero GHG emissions across all of its operations.