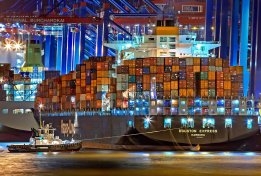 The worst of the crisis may be over for the container shipping sector. File Image / Pixabay

There are early signs of some demand returning for container shipping, according to consultancy Sea-Intelligence, with some previously blanked sailings now being reinstated.

"The total number of blank sailings has plateaued for a few weeks now, with carriers seemingly satisfied with their current blank sailing announcements," the company said in an emailed statement Monday.

"In the past week however, a few sailings have been re-instated as carriers see sufficient demand to warrant "un-blanking" these sailings."

The change is still "very small" at this stage, the company said, but further out in the year there are currently "no material blank sailings" for the third quarter of this year.

Meanwhile the average size of boxship being used on the Asia-North Europe route has increased to 17,000 TEU by the end of the second quarter from 16,000 TEU at the time of the Lunar New Year holidays, Sea-Intelligence said.

The new hire joined the company's Antwerp office this month.