Knowing the relationship between the price of crude and bunkers is useful for anyone who wants to better understand what the future cost of marine fuel might be.

The January 1, 2020 introduction of the IMO 2020 rule meant lessons learnt from the historical HSFO / Brent relationship could no longer be used, while the unique market dynamics of 2020 means it has taken some time to pin down what a useful crude / VLSFO model will be going forwards.

A year on from the introduction of the 0.50% sulfur cap and the new-normal of COVID-era market dynamics, useful patterns are now emerging.

Looking at Ship & Bunker's Global 20 Ports Average - that tracks the average price of bunkers in 20 key bunkering hubs responsible for a significant proportion of global volume - in the years proceeding IMO 2020 HSFO bunkers were typically priced at a discount to Brent of 15-30%. As the Fig 1 graph below shows it wasn't as certain as death and taxes and for sure there have been some notable departures from that norm, but overall it has been a true enough rule of thumb to allow meaningful forward price planning for bunkers to be made based on the crude outlook. 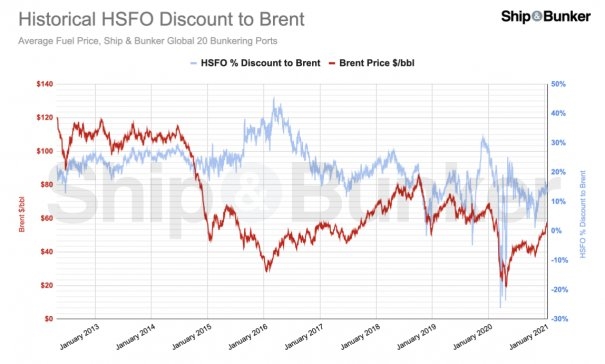 IMO 2020 changed all that. For one, the Brent / HSFO relationship changed completely in the run up to IMO 2020 due in part to HSFO's imminent retirement as the world's most popular grade of marine fuel. HSFO prices relative to crude also rocketed, at times even priced at a premium to Brent, although at the time this got less attention than it might have otherwise as the underlying oil prices were extremely low.

Come the start of 2020 and the majority of vessels switch over to VLSFO. At this point there is an incredible squeeze on the market due to the demand spike for 0.50%S product and simultaneous supply dip due to bunkering assets being taken offline for cleaning as part of their switch to supplying low sulfur material. This meant the logistics cost and certain other components of the bunker price were incredibly high at this time. In Q1 2020 the premium for VLSFO over Brent averaged 35.5%, but at times spiked to over 60%.

The extra bump to prices during the transition was always going to be temporary affair and the supply & demand picture would naturally settle out, but as we know the advent of the coronavirus pandemic prompted this correction to occur sooner rather than later. Even in Q2 2020 the VLSFO premium to Brent had softened to an average of 13%, and for Q3 it was just 5%. As readers will no doubt be aware, both oil and bunker prices rose significantly in Q4, and with them the average premium for VLSFO in the period rose to 8% over Brent. For January so far we have seen that creep up to 10%. 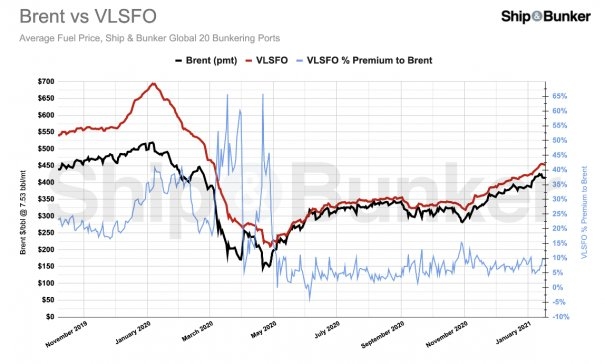 So the question is, have we now established a relationship between Brent and VLSFO? Time will tell, but looking at the data the answer seems to be yes, at least for the near term. VLSFO for several months has been priced at a premium to Brent of around 5-10%, with occasional spikes to 15% and dips as low as 2%.

If nothing else, 2020 reminded us that things can change in an instant, but with the outlook being what it is for 2021, planning for VLSFO prices at a premium to Brent in the above range seems a reasonable place to start.

How does the current crude forecast translate into expected bunker prices?

It is important to remember that no-one has a crystal ball, and predictions of what will happen in 2021 are perhaps even more futile than usual thanks to considerable uncertainty over the impact of the ongoing coronavirus pandemic. Presumably at some point matters will be brought under control and life will return to some variation of pre-pandemic normalcy. When that happens, the concern is that demand could return somewhat suddenly and unpredictably, causing a significant spike for oil and bunker prices.

The other side of the worry coin sees people pondering whether right now is the new norm, where a conveyor belt of new COVID strains or the emergence of other potential health threats keeps us bouncing between lockdown levels and the global economy in a subdued state for years to come.

Taking all these factors into account, Goldman have adopted a bullish outlook for 2021 and recently predicted Brent to hit $65/bbl by mid-year, six months earlier than it predicted in December.

Standard Chartered are among those taking a more conservative approach, earlier in the month predicting Brent this year to average just $51/bbl.

Translating this into bunker prices; on the low end $51 Brent coupled with a 5% VLSFO premium would translate to bunkers at just over $400/mt. 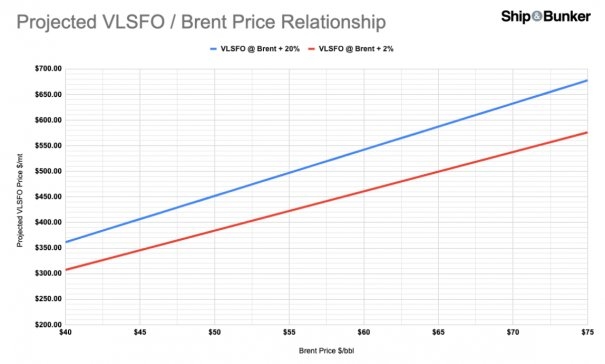 The vessel will have 12,500 m3 of LNG capacity and will be built at the Hyundai Mipo Shipyard for delivery in June 2023.

Sekavin was founded in 1979 and focuses on bunker and lubricant supply at Piraeus, Agioi Theodoroi and Syros.