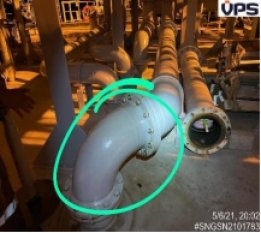 Close attention needs to be paid to a vessel's pipes to see where bunkers may go missing. Image Credit: VPS

Bunker quantity control continues to be underestimated. And this is costing operators thousands of dollars per day.

In 2019, our white paper revealed that failure to properly control the bunkering process resulted in a quantity loss of US$96,200 per vessel per year, on average.

Additionally, VPS Bunker Surveyors recorded 82,490 m/tons of undeclared bunkers in 2020, many of which could have been prevented if stakeholders had hired professional bunker surveyors – for a fraction of that cost.

This situation has worsened due to the restrictions on physical movement due to COVID-19. In fact, this caused the number of bunker monitoring and control surveys to drop, creating a marked increase in illegal activities.

On 5th June 2021, VPS carried out a Remaining On Board (R.O.B.) survey on board a Singapore-registered bunker tanker at short notice by the charterer. The local authorities had detected the bunker tanker carrying out unauthorized transfer of bunker cargo to another vessel soon after she came out of a loading terminal.

The R.O.B. survey on board the bunker tanker confirmed a shortage of 98 mt in comparison with the after loading R.O.B. quantity at the terminal.

The VPS Surveyor discovered evidence that the pipeline flange before the Mass Flow Meter (MFM) had been opened and the bunker cargo was transferred out via this outlet to the other vessel.

It's a disturbing fact that internal R.O.B. controls can easily be manipulated or skewed if managed by unscrupulous staff.

At VPS, we firmly believe that prevention is better than cure.

The VPS Bunker Surveyor acts as the eyes and ears for the vessel's chief engineer and staff by expertly supervising the total bunker operation. They take care of the bunker delivery, provide local knowledge, complete all the necessary paperwork, ensure proper sampling, distribution and fast sample dispatch to the nearest VPS laboratory.

To put this another way, both the R.O.B. on a bunker tanker and the vessel risk large financial losses when poorly managed.

We recommend engaging the professional services of a VPS Bunker Surveyor. Our experience, integrity and expertise will accurately and independently verify the exact quantity onboard.

This approach actively protects your investment and your reputation. And you can't put a price on that.

Fremman Capital has entered exclusive discussions with IK Investment Partners to buy its stake in the testing firm.

The company has signed a joint development deal with Australia's Calix Limited to incorporate the firm's RECAST carbon capture system into its product offering.