Europe Calls for Urgent Update and Harmonization of Scrubber Rules 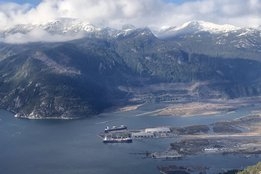 The European Commission (EC) has released a draft submission to the IMO that calls for urgent changes to guidelines on the use of marine scrubbers so they are fit for purpose and harmonized so the industry is not forced to deal with a patchwork of regional regulations.

While the use of scrubbers, formally known as exhaust gas cleaning systems (EGCS), is already covered by IMO Resolution MEPC.259(68), an EC report this week suggests the current guidelines fall short in a number of areas.

Driving the need for change is concern over the environmental impact of wastewater discharge in ways not addressed by current guidelines, such as the discharge of certain heavy metals.

Also seen as inadequate is the current guidelines' identical treatment of coastal and deep-sea waters; that is, they only stipulate discharge standards and do not specify discharge criteria specific to certain geographical areas.

The operation by ships of installed EGCS, especially in port waters, coastal areas or ecologically sensitive areas are expected to lead to a degradation of the marine environment due to the toxicity of water discharges

"The operation by ships of installed EGCS, especially in port waters, coastal areas or ecologically sensitive areas are expected to lead to a degradation of the marine environment due to the toxicity of water discharges," the report says.

As a result, certain geographical areas have already put their own rules in place for scrubber wastewater discharge such as recent moves by Singapore and Fujairah, and the report says that without further guidance a problematic patchwork of different rules could emerge.

"By adopting measures applicable to all ships, the Organization will limit the proliferation of local or regional measures, which, because of their diversity and specificities, contribute to the administrative burden on crews and to the increased risk of accidents or incidents on board ships," the report says.

"A uniform measure will also limit the risk of prosecution and detention of ships in the context of port State control inspections."

But EC says it is also questionable as to whether the current discharge criteria are fit for purpose given the uptake of scrubbers and other technologies causing discharge is expected to grow significantly, not least as a result of the upcoming IMO 2020 global 0.50% sulfur cap on marine fuel.

To address these issues, EC proposes the creation of a "Definition of the sea areas and conditions under which liquid effluents from exhaust gas cleaning systems may be discharged into the waters".

"This new output should make it possible to guide industry as of now with regard to technology choices in order to avoid having to take retroactive measures in a few years' time. These measures could entail, but are not limited to applying stricter discharge criteria or the prohibition of discharges from a particular technology," EC's proposal states.

"It is considered necessary to be able to take appropriate regulatory measures to protect certain areas from pollution resulting from the mentioned discharges, which could also include discharge bans from ships using a specific technology."

But whether it is through such a harmonized approach to scrubber standards as envisaged by the EC, or through further action taken by individual local or regional authorities, the report acknowledges any change to scrubber rules will have financial consequences.

"The sooner uniform and unambiguous regulatory measures are developed and adopted, the better the potential pollution will be controlled and the less significant the economic impacts will be both on industry and administrations," EC says.

"These measures are therefore considered urgent."

With less than 11 months before the start of IMO 2020 and after a surge of recent investment in the technology by shipowners, left unsaid is why it has taken until now for such an overhaul of scrubber rules to be proposed.

Whatever the reason, it is not because the uptake of scrubbers is higher than anticipated, with the EC report noting the number of vessels fitted with the technology falls some way short of the 3,800 vessels previously envisaged by the IMO's fuel availability study.

EC intends for its proposal to be made at the Marine Environment Protection Committee (MEPC 74) in May.

The full draft proposal can be read here: https://data.consilium.europa.eu/doc/document/ST-5782-2019-INIT/en/pdf

The company is seeking candidates with 1-4 years of experience in a similar role.