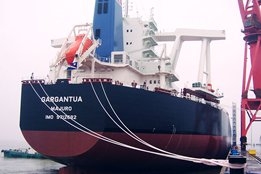 Dry bulk operator Star Bulk is to install exhaust abatement equipment or scrubbers across its fleet before the start of the new, 0.5% sulfur cap on bunker fuel which starts on January 1, 2020.

In a stock exchange release, the listed company, which is controlled by Greek shipping interests, said that said that around two-thirds of the work would be funded by new debt.

In addition, it said that installation costs would be around $2 million per vessel and that around a third of the work would be undertaken by "riding teams deployed to carry out the retrofitting works onboard the vessels while at sea".

The company's fleet comprises over 100 vessels. In June, the company ordered 22 scrubber units.

The cost of installing exhaust abatement equipment varies across ship types and by circumstance but is generally at around $5 million per ship.

With ten power points for seagoing and inland shipping.