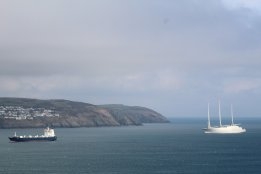 The Isle of Man is seeking to attract greener ships to its flag registry. File Image / Pixabay

The Isle of Man Ship Registry is set to offer discounted registration fees to ships taking on decarbonisation technology.

The flag registry plans to give a 15% cut in annual registration fees to operators of cargo ships, commercial yachts or passenger ships investing in alternative fuels including biofuels, wind power or shore power, it said in an emailed statement on Monday.

The plan will be put before the Isle of Man's legislature in March, and will come into effect for fees from April 1 if approved.

"The IOMSR is a progressive flag state and we are looking at ambitious ways to take action on the decarbonisation agenda that make a difference," Cameron Mitchell, director of the Isle of Man Ship Registry, said in the statement.

"There is so much debate in the sector regarding which alternative fuels will be best in the future which conversely can create confusion and delay innovation.

"We want to jump start work in this area with this new green registration fee and state clearly that if you are a shipping line making steps towards hitting IMO Greenhouse Gas (GHG) emissions targets, the Isle of Man flag will reward you.

"We want to welcome more new, greener ships to our fleet."

The discount would apply to ships that can provide evidence of one of the following, according to the statement: