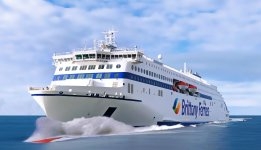 Brittany Ferries is set to take on two ships capable of running on LNG or battery power.

The company has chartered the two ferries from Stena RoRo on a ten-year agreement, with a purchase option after four years, it said in a statement on its website on Wednesday. The ships are due to arrive in 2024 and 2025.

"As well as significantly cutting emissions, the hybrids will deliver less noise, less vibration for passengers and a step towards future-proofing the company," Brittany Ferries said in the statement.

"The ships operate on the same principle as a hybrid car.

"At sea, they will be powered by cleaner LNG (liquefied natural gas) fuel.

"But in a first on the English Channel, they will also operate partially or completely on battery power, for example when arriving at and departing ports.

"Furthermore, they will be ready to plug in to shore-side power when this is available in ports."

The company has a fleet of 12 ships in total.

The UN body's committee adopted amendments to MARPOL Annex VI, initially agreed by a working group last year, to bring in binding short-term measures from the start of 2023 that hold ships to both operational and technical carbon intensity requirements as

The company is looking for candidates with a high level of English and at least three years of experience of similar roles.