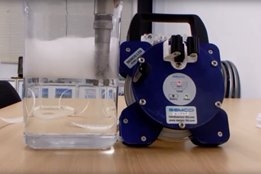 Japan-based SEMCO hopes its electronic measuring tape offering will be a good fit to ease the growing demand to measure lighter marine fuels, a task likely to become more frequent thanks to the upcoming 0.50% global sulfur cap on marine fuel.

"In complying with the new regulations, there will be an increasing number of cases in which high transparency and low viscosity fuels such as MGO are supplemented for today's HFO bunkers," a SEMCO spokesperson told Ship & Bunker.

"Due to its consistency, HFO can easily be seen on the tape while past experience tells us for lighter fuels it can be difficult to get an accurate measurement of tank contents again the tape."

The manual tape is designed to take the tank's ullage measurement. It is equipped with a sensor that activates a lamp and buzzer at the point the tape reaches the surface of the liquid.

To add to its ease of use, SEMCO say the device is also portable and does not require an external power supply.

Originally developed in 2014, the meter is already used on over 400 vessels including those of NYK Line and Japan Coast Guard.

"The advantage is that no special skills are required to take the measurement, and there is no need to apply chalk, or wipe oil etc. Measurements can be made in about a quarter of the time," says Mr.Sato of NYK Shipmanagement Pte Ltd.

"It is also accurate, and not influenced by bubbles on top of fuels caused by aeration."

Heavy distillate and residue stocks at Fujairah jumped by 12% in the week to Monday to reach 12.621 million barrels.