Biodiesel as a main alternative for Bio-Bunker

Biodiesel fuels represent a real alternative to the VLSFO. They have very similar properties compared with fossil-based fuels and shipowners don't require a massive re-style of their engine system. Everybody can start using them today.

In order to fully understand the biofuel market let's evaluate the pros and cons in depth.

There are two classes of biofuels commercially available and ready to be used:

We will soon have additional large-scale options available in the industry:

Here is an example of a biofuel scheme:

First Generation Biodiesel (or FAME) has a higher flash point (149°C) and cetane number than conventional diesel, providing good ignition and lubrication properties. However, FAMEs have a high cloud point, which can cause clogged filters and poor fuel flow at temperatures below 32°C.  Their addition reduces smoke, soot, and burnt diesel smell from the engine exhaust.

The main technical disadvantage of biodiesel over petrol-diesel is the lower thermal energy due to higher oxygen content which also results in lower oxidation stability. Another major concern related to the use of biodiesel is the contamination by water, which results in biofuel decomposition, reducing fuel efficiency, soliciting microbial growth, and accelerating fuel gelation at low temperatures.

FAME cannot be used at 100% in diesel engines due to the presence of fatty acids that can cause anomalies in currently used diesel engines. For this reason, it is added in a mixture with petrol-diesel between 5-30%, respecting the specifications outlined in the standards: EN 14214 or ASTM D6751.

There are several standards covering biofuels addressing either technical or sustainability aspects. The ISO 8217:2017, the commercial specification for marine fuels defines requirements for fuel used in marine diesel engines and boilers and their conventional treatment on board (sedimentation, centrifuging, filtering) before use. While this standard did not allow FAME to be blended with regular marine distillate or residual fuels in the past, its sixth edition introduces the DF (Distillate FAME) grades DFA, DFZ and DFB. These grades allow up to 7% of FAME content by volume and are also covered by the European standard EN590. Apart from this aspect, all other parameters of these grades are identical to those of traditional grades. The limitations mentioned above do not apply to HVO, which is classified as a DM (distillate) under the ISO standard, provided that certain conditions are met.

For these reasons our research is highly focused on second generation biofuels, for example HVO.

Properties of HVO have many more similarities with high quality sulphur free fossil diesel fuel than with FAME. As a matter of fact, the properties of renewable diesel are very similar to the synthetic gas-to-liquid (GTL) diesel fuels. Also, the same analytical methods as used with fossil fuels are valid for renewable diesel.

Some of the strong aspects of HVO are:

Many large companies are using pure HVO as a main fuel for their ships in lieu of VLSFO/HVO blends without all the needed research on the possible damage of expensive equipment.  While pure HVO is definitely a possible solution for the future, I do not believe it's the best alternative at this time.  A better and safer starting point could be a blend of VLSFO with different percentages of HVO. When HVO is blended with other fossil-based blend components to make VLSFO is important that all the ISO:8217-2017 specs are met. It is also important that the order of blend is respected to avoid the final product to be incompatible and unstable.

We know that blending is the arithmetic of properties and prices.  Currently the price of the VSLFO is around $865/ton (Ship&Bunker April 2022), and the price of HVO is around $2000/ton (Argus averaged price April 2022). The HVO price is highly dependent on the feedstock used for its production.

Following we can see a price chart comparing the price of the final blend (VLSFO+HVO) for different mass percentages of HVO: 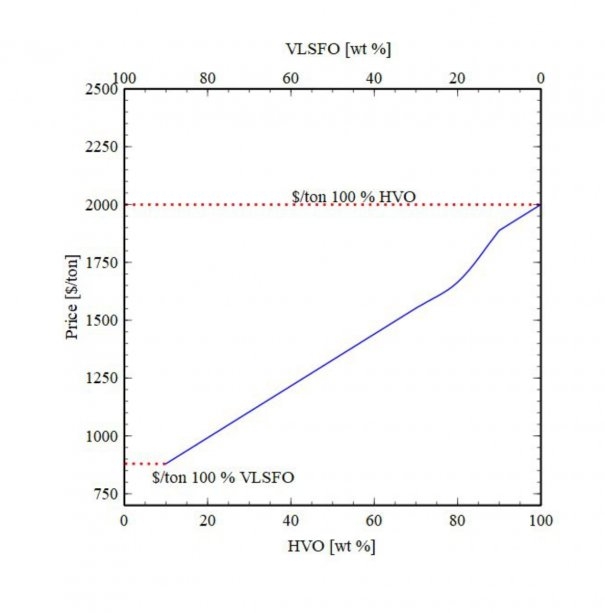 From the above figure, we can deduct that if high amounts of HVO are used, the final blend price would be higher than using pure VLSFO. Of course, blends with HVO will be healthier, but not very economical. Other aspect to keep in mind is the stability of the blend. Blending HVO (High paraffinic content) in high quantities can decrease the aromaticity of the final blend, producing sludge; it's absolutely important to analyze the HVO properties with reputable COA (certificate of analysis) before purchasing it. It is also mandatory that pre-blends are checked in the lab or through models to avoid surprises in the middle of the ocean. For those reasons when we make a blend, prices and properties must be counted simultaneously.

As the biofuel markets grows and there are unclear regulations controlling it, we hope that ISO8217-2017 gets some modifications taking into account renewable biofuels in a better way.

The year 2022 is definitely the year were everybody "discovered" renewables and GHG's threat to Humanity. In the next year, the goal should be to find an alternative fuel to the current VLSFO that brings carbon emissions close to zero and decreases the NOx. Many alternatives have been proposed, from LNG, Hydrogen, Ammonia, Green Methanol and Biofuels. We are exploring a new territory so even the regulations are not clear on what to do and what not to do. The capital investments for new fuels are quite high, and if you are not a multi-billion dollar shipping company, it is very complicated to find the right cash flow to refurbish your current fuel system. For all those reasons, biodiesel blends, in particular the second-generation renewable diesels, HVO, could be a serious alternative to VLSFO. They have very similar properties compared to fossil-fuel based diesel and decrease CO2 and NOx emissions. A healthy percentage of HVO to be used in the blend must take into account prices and properties. New studies highlight the possibility of having HVO 100 wt%, but the price is still relatively high ($2000/ton). Let's invest in the present. Renewable diesel blends are the immediate solution Worldwide. 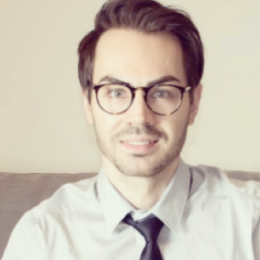 Eliseo Curcio is a Chemical Engineer, and Principal Consultant at Blend Tiger, LLC; a consulting company working in fuel and bio-fuel blending business. Mr. Curcio is an optimization and modeling specialist, with over 10 years of experience in the areas of gasoline, diesel, crude and bunker blending, and on the bio-fuels such as bio-ethanol, bio-methanol, bio-etbe, bio-gasoline, bio-diesel and bio-bunker. Currently Mr. Curcio is involved in developing, optimizing and modeling new plants and creating new blends for bio-gasoline, bio-diesel and bio-bunker to decarbonize the sector. He previously worked at Catholic University of Louvain (Belgium) in advanced modeling and optimization in the membrane area. He holds BS and MS degrees in chemical engineering with high honors from the University of Calabria, Italy.

Michele Miceli is a M.Sc.Che.Eng student and chemical engineer inter at Blend Tiger, LLC. He has been helping Mr. Curcio with alternative fuels for the marine and automotive industry. He is also responsible of making new bio-bunker blends with renewable diesel and developing bio-pilot plants. He holds BS degree in chemical engineering from the University of Calabria, Italy.

Firms Link up on Collecting Data on Maritime Emissions

Bunker Holding CEO Keld Demant discusses his firm's new strategy in an interview with Ship & Bunker after seeing the second-best results in the firm's history in 2021/22.