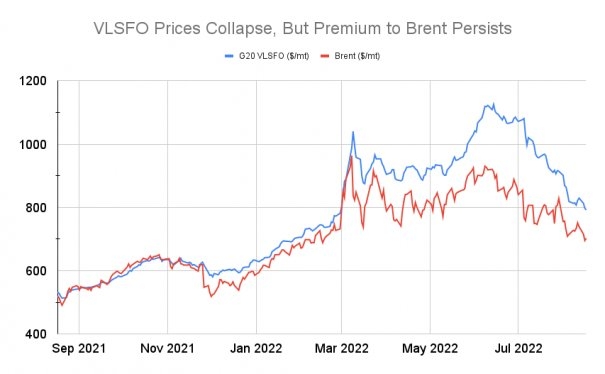 While outright VLSFO prices have dropped, they remain at a significant premium to Brent crude. Image Credit: Ship & Bunker

Global average VLSFO prices are back below $800/mt after a collapse in crude oil in recent weeks, approaching the levels seen before the Russian invasion of Ukraine upended energy markets in late February.

Ship & Bunker's G20 Index of average VLSFO prices at 20 leading bunkering ports dropped below $800/mt this week and stood at $792/mt on Wednesday, the lowest level since February 28.

The G20 Index stood at $752/mt on February 23, the day before Russia's full-scale invasion began, and surged by 49.7% over the next four months to the record high of $1125.50/mt on June 14 on concerns of global energy shortages as Western countries sought to phase out Russian oil imports.

But the possibility of inflation leading to a global recession has since outweighed the nerves over potential shortages, driving down crude markets and delivered bunker prices with the rest of the complex. The G20 average VLSFO price has collapsed by 29.6% since the June 14 peak.

But VLSFO still stands at a historically unusual premium to crude, with inflated prices for middle distillate blending components ahead of an expected shortage of heating oil in Europe this winter. G20 VLSFO prices stood at an $89.53/mt -- or 12.7% -- premium to Brent crude in metric tonne terms on Wednesday, compared with an average premium of $11/mt -- or 1.9% -- in the year to February 23, before the invasion.

The facilities are being constructed at Stadsgården quay berths 167 and 160.