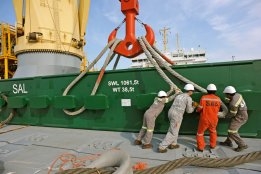 Germany's SAL Heavy Lift is the latest shipping company to embrace digitalisation in its bunker procurement systems, working with Glencore subsidiary Inatech to improve its strategy.

The app "enables companies to map entire fleets of ships and visualise and plan for the best port to bunker, given sea and port conditions, to achieve the lowest prices for the desired quality of fuel," Inatech said.

The system allows shipping firms "to track their vessels on an integrated system that displays fuel levels on board, news alerts and live pricing data from S&P Global Platts," the company added.

While digitalisation has long been discussed as a potentially useful trend for the shipping and bunker industries, the high premium set on interpersonal relationships in bunker procurement has frequently held it back.

But this year it appears fresh efforts are being made to bring more technology into bunker buying, with a series of new digital services having been announced over the past few months.

The contributory factors to this issue have varied from port to port.

The company said it may be another month before general oil demand starts to recover.