IMO 2020: New Rules Will Cause a "Second Round" of Slow Steaming, says APL 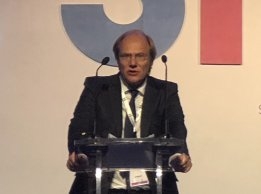 Of that, he sees container shippers will incur a cost of $15 billion, and the CMA CGM Group, of which APL is s part, $1.5 billion.

This cost will unfortunately have to be borne by the customers, he added.

As part of efforts to reduce costs as a result of the new rules, Sartini says the industry will witness a “second round” of slow steaming, which will also spur a new wave of maintenance solutions such as the modification of ship bows.

Slow steaming has already become commonplace as a result of rising bunker costs.

CMA CGM has 11.7% of he world’s box shipping capacity by TEUs, according to Alphaliner.

Maersk, the world’s biggest box shipper with 17.9% of the market, recently pegged its cost of IMO 2020 at $2 billion.

After slumping in the wake of global measures taken to address the Coronavirus pandemic.

'We Can't Afford to Wait for the Ideal Solution' on Alternative Fuels: Probunkers

Probunkers sees a general consensus that LNG bunker demand will grow to 8-12 million mt/year by 2025.

Traders continued about the impact of COVID lockdown measures, this time in Madrid.