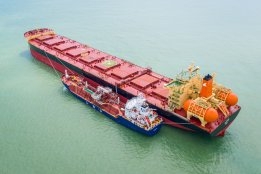 The fuelling took place in Malaysian waters to the bulk carrier HL Green and was executed in partnership with Petronas Marine.  At 2,760 cubic meters,the bunkering ranks among the largest LNG bunker deliveries performed to date, according to the company.

Nacho De Miguel, who heads up its LNG business, said that delivery was made within 20 hours.

"A record time for the quantity supplied, including the cooling down of an LNG tank," he added.

The Peninsula group is working on multiple deals in strategic bunkering locations worldwide, it said.

In addition, the company is considering developing its own LNG bunkering fleet and "is currently in discussions with several shipowners and shipyards to materialise its strategic LNG plan".

But lack of investment seems to ensure tight supplies in the near-term, says Vitol.