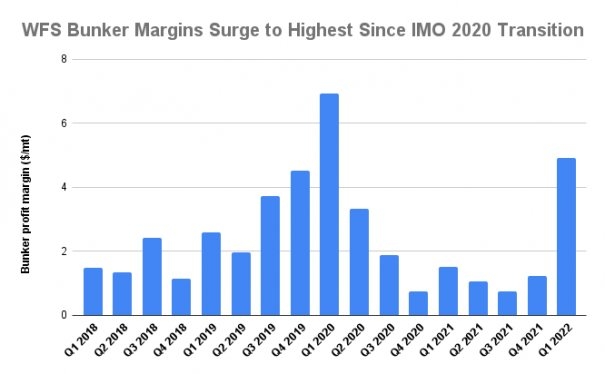 US-listed World Fuel Services has seen the income it receives from every tonne of bunkers it sells surge to the highest level since the IMO 2020 transition in the wake of Russia's invasion of Ukraine and the subsequent market volatility.

The company reported net profit of $23.1 million from its marine division in the first quarter of 2022, up by 292% from the previous quarter and by 261% from the same period a year earlier, it said in quarterly results released late on Thursday.

That left its bunker margin at about $4.92/mt, up from $1.21/mt the previous quarter, from $1.52/mt a year earlier and the highest level since the first quarter of 2020. During the uncertainty of the IMO 2020 transition concerns over the availability of the new VLSFO blends meant bunker suppliers were able to command significantly higher premiums than usual.

In a call with investors Michael Kasbar, CEO of WFS, said surging bunker prices were behind the renewed profitability of the firm's marine division.

Most of our marine transactions are executed on a spot basis, and we earn higher returns on the back of higher prices.

"Unlike our aviation business most of our marine transactions are executed on a spot basis, and we earn higher returns on the back of higher prices resulting in extraordinary performance when compared to recent periods.

"As credit capacity and variably tightens and high price markets, the scale of our business and the strength of our balance sheet differentiates us in a volatile pricing environment, we can continue to provide our customers with the products, services and credit they require when they need it most.

"And simply put, this served us well in the first quarter.

"With the backdrop of high container and dry bulk rates, strong commodity demand, capacity constraints, rising interest rates, supply chain efficiencies, and sustainability, we have expanding opportunities to play an important role in the success of our marine customers."

Ira Birns, chief financial officer at WFS, said he expected the trend to continue in the second quarter.

"As we look ahead to the second quarter, we expect marine gross profit to remain strong as the price of bunker fuel remains at or above first quarter averages," he said on the call.

Many folks that we may come up against in the market don't have the size of balance sheet that we do; so they need more capital, and capital is becoming more expensive.

"If this trend continues, second quarter marine results should again be materially ahead year-over-year and relatively consistent with the results delivered in the first quarter."

Birns also said the environment of rising interest rates around the world was also positive for its marine division as it left smaller creditors with a tougher credit environment.

"The principal driver this quarter in particular, is just the substantial increase in flat price of a metric ton of bunker fuel, rising to more than $800," he said.

"And then if you combine that with rising interest rates, you've got many folks that we may come up against in the market don't have the size of balance sheet that we do; so they need more capital and capital is becoming more expensive.

"It just naturally makes them a little less competitive, or in some cases a lot less, and it gives us a greater chance to win on the back of our global scale and strong balance sheet.

"This isn't the first time we've seen that."

No mention was made on Thursday's call of how much business the firm is still doing in Russia.

The company is the largest bunker supplier not to have commented yet on whether it will be withdrawing from bunker deals at Russian ports, or dealing more widely in Russian-origin oil around the world. The firm has not responded to a request for comment on this issue from Ship & Bunker.

In the WFS investor call in late February, just after the outbreak of war, Birns said the firm had exposure of a few million dollars on the marine side in Russia, and that it would be reviewing its business there.

"Obviously we're monitoring this situation, just as you are, considering the escalation overnight, and we're being very careful about managing any additional credit from today going forward," Birns said in the call late on February 24.

The company is looking for candidates with three to five years of experience in a similar position.

Australian Bunker Markets Get Boost as Cruise Ships Return Down Under