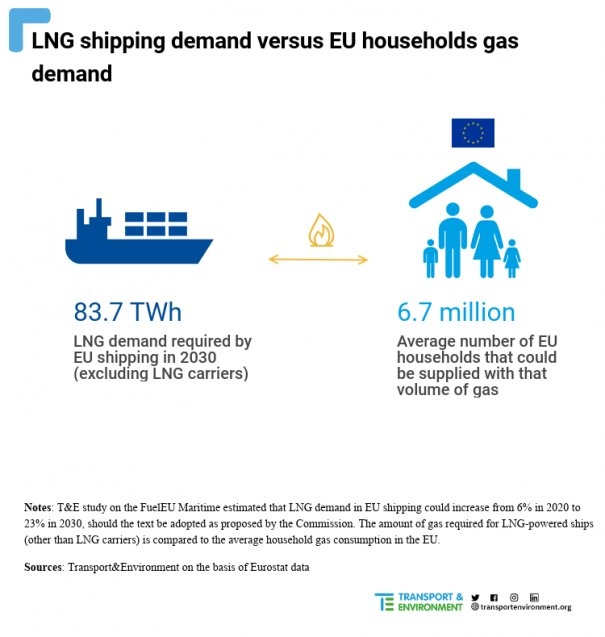 The growth in LNG as a bunker fuel means European gas-powered shipping could be taking up enough energy to power as many as seven million homes by 2030, according to NGO Transport & Environment (T&E).

The organisation estimates European gas-powered ships could be consuming more than 6.3 million  mt of LNG by 2030, it said in an emailed statement on Thursday. That would account for seven million homes' worth of power, up from 200,000 homes' requirements taken up by today's LNG bunker demand.

"As families across Europe struggle to pay their energy bills, the shipping industry is looking for new ways to burn gas," Constance Dijkstra, a campaigner at T&E, said in the statement.

"By 2030 nearly a quarter of Europe's shipping could be running on LNG at a time where we should be reducing our reliance on fossil fuels.

"This cannot be allowed to happen."

Whether or not readers find the estimate for growing gas demand from shipping a matter of concern will come down to which side of the LNG bunker debate they come down on.

Opponents see LNG as just another fossil fuel, and an expensive distraction on the road to the decarbonisation of shipping, while supporters see it delivering reductions in GHG emissions in the short term while leading to the uptake of more environmentally friendly alternatives like bio- and synthetic LNG in the longer term.

The argument that gas-powered shipping is currently taking up LNG that could be better used in other industries during the Russia-Ukraine energy crisis does not entirely stand up; the surge in LNG prices this year has meant that most dual-fuelled vessels capable of running on LNG are choosing not to while conventional bunkers are so much cheaper.

The question remains of how tight LNG markets will remain over the longer term, and whether other industries should take priority over shipping in accessing gas during periods of scarcity. But looking out to 2030, environmental campaigners would tend to argue that fossil gas should not be used for powering homes by that point in any case.

VGO, a key blendstock for some types of VLSFO, may be in short supply in Europe next year.

Historically the bunker industry has avoided owning production assets, but after last year's record margins some firms may warm to the idea.