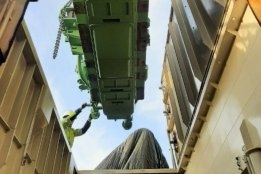 The first engine was reinstalled on the vessel on Monday. Image Credit: Port of Antwerp-Bruges

Engine work has been completed in the conversion of one of the Port of Antwerp-Bruges's tugboats to run on methanol.

Anglo Belgian Corporation has converted the tug's engines to allow for methanol propulsion, the port authority said in a LinkedIn post on Thursday. The first engine was reinstalled on the vessel on Monday.

"This will allow our tugboat to run largely on methanol, when it's finished, reducing its CO2 emissions significantly," the Port of Antwerp-Bruges said in the post.

"It is yet another important step towards greening our fleet."

The port authority first announced the plan in 2020.

Methanol has rapidly grown in popularity as an alternative fuel over the past two years since container line AP Moller-Maersk announced its decision to opt for methanol propulsion. Methanol-fuelled ship orders outnumbered those with LNG propulsion for the first time last month, according to classification society DNV.

Martiens Potgieter has joined the firm as a bunker trader as of this month.