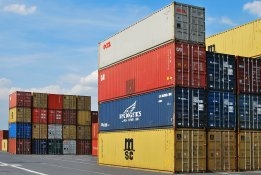 The container market has been disrupted by high demand and reduced capacity at terminals. File Image / Pixabay

Shipping firm Star Bulk is responding to the current supply-demand imbalances in the container freight market by setting up one of its bulkers to carry containers.

The firm has altered one of its 175,000 DWT Capesize bulkers to be carry about 1,400 TEU, including 200 laden boxes and 1,200 empty ones, shipping intelligence service Alphaliner said in its weekly newsletter on Wednesday.

Alphaliner called the move a 'historic first', with the last attempt to do something similar done in the 1990s on much smaller bulkers operated by CAST.

"With a dearth of capacity onboard container vessels and a lack of cellular tonnage to charter, a number of major shippers have in the past months tapped into the multi-purpose and OHBC (open hatch bulk carrier) markets to ship their containers overseas," Alphaliner said in the note.

"Multi-purpose owner BBC Chartering and OHBC operator Saga Welco have been among the carriers used to ship these extra flows of containers, for various major shippers. including retail giant Walmart among others."