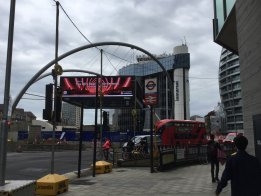 Digital innovation in the maritime industry will increase exponentially, according the founder of a US-based facilitating company active in the area.

Speaking to Ship and Bunker on the sidelines of the Inmarsat digitalisation and international trade event in London, Blue Incubator co-founder Judith Underwood said that regulatory change in the maritime sector had "de-risked" start ups looking at the way shipping goes about its business.

"It's been the catalyst," Underwood said.  Research taking place in universities is now moving into the commerical space with help from firms like Blue Incubator which can lend a hand with partnerships, funding and mentoring.

That innovation includes marine fuels with battery-powered vessels and hydrogen as marine fuel attracting a lot of attention.

Underwood said that her company had moved on from being purely research to linking up with industry partners.

With regulatory change such as IMO2020, players can see that these ideas "have a future" in the market place, she said.

Erik Lund, who is business development managing director at European start up enabler Rainmaking, said that current inefficiencies in shipping made it ripe for innovation.

Citing recent research, he said that that fuel costing billions of dollars was lost from inefficiencies from port operations.

Lund said that even taking a notional figure on the costs associated with vessels entering and leaving ports inefficiently and multiplying that by the global fleet, the opportunities for innovation were huge.

Lund said big maritime players were focussed on digital innovation in the way ports work, a focus of which his company is part of.

The deployment started on July 6, and follows similar deployments in the country in 2018 and 2019.

On stacked up inventory.