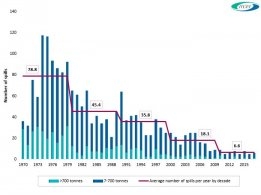 Over the past five decades there have been progressively fewer oil spills in what is an identifiable downward trend, according to data from tanker owners organistaion ITOFP.

Oil spills are categorised by the organisation as small, medium or large.

Recorded spills of 7 metric tonnes (mt) or more have been averaging seven from 2010.

"The average number of spills greater than, or equal to, 7 mt in size has continuously reduced and, since 2010, averages around 7 per year," Itopf said.

Last year, there were two reported spills of over 700 mt and four medium-sized spills, defined as between 7mt and 700 mt.

"The estimated total amount of oil lost to the environment through tanker incidents in 2017 was approximately 7,000 mt, the majority of which can be attributed to the two large incidents mentioned above," it said.

ITOFP (International Tanker Owners Pollution Federation) was established in 1968 following the the Torrey Canyon oil spill off the UK coastline. It offers technical advice and support to mitigate the impact of oil pollution incidents at sea.

GCMS is an advanced and more expensive testing technique that has been used more widely in the bunker industry since the global contamination problems of 2018.

"This course will give you and your team a deeper understanding of how to make a variety of fuel oils," says RAI President & CEO, Ara Barsamian.

The long-term deal gives WIP the ability to distribute fuel products elsewhere in the Caribbean and Central American markets.