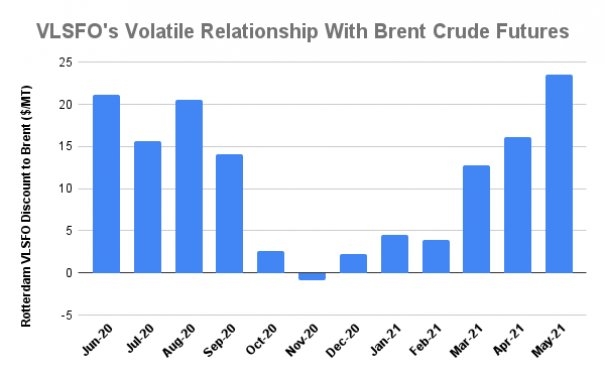 The bunker industry is beginning to express its frustration about not having relevant price assessments upon which to base its trades.

The topic was expressed at length on Wednesday in an online meeting of IBIA members. The meeting was held under the Chatham House rule, meaning the authors of individual comments cannot be identified without their permission.

A bunker supplier kicked off the discussion mentioning the difficulty of giving bunker fuel offer quotes to his customers priced against volatile ICE gasoil futures.

"You have to buy and sell basis ICE quotations," the supplier said.

"Yesterday, for example, the ICE daily range was $19/mt.

"You go to your client, and they don't come back within 15-20 minutes, and the price has probably gone up by $10, which is above your margin."

BLUE Insight director Adrian Tolson, chairing the meeting, explained how the IMO 2020 transition had brought the problem about.

In the pre-IMO 2020 world we were buying off the HSFO postings and it was a simple world.

"In the pre-IMO 2020 world we were buying off the high sulfur fuel oil postings and it was a simple world," Tolson said.

"Now you're buying off diesel or crude, but you're selling VLSFO and so the discounts are hard to follow.

"It's a difficult way to operate if you're a bunker supplier, because you have serious basis risk between those two indicators."

Another IBIA member highlighted that, while VLSFO price assessments have been provided by the price reporting agencies, the wide range of VLSFO viscosities being sold under the ISO 8217 RMG 380 specification mean these assessments are not always relevant.

"The ingredients that we use, the blend components to make the stuff, are different, they're priced differently.

"We cannot compare on an applies-to-apples basis.

A price reporting agency representative confirmed this, saying they see a wide range of VLSFO qualities in the pricing information submitted to their reporters.

Another member pointed out that more transparency on VLSFO energy content could be useful to make price comparisons more easy.

"Why don't you put in the energy content -- which in the future we're going to have to do, because people will want to know the carbon content -- as well?

"Maybe that is a way to bring some stability into the pricing."

One IBIA member suggested that the industry make more use of the wide range of ISO specifications that VLSFO could fall under, rather than just using RMG 380.

The pricing system is no longer separating between 180 and 380 [CST], which is kind of odd.

"The pricing system is no longer separating between 180 and 380, which is kind of odd, because I think we all know that the vast majority of VLSFO sold is probably actually below 180 CST, and yet everybody's just asking for the same spec."

BLUE's Adrian Tolson agreed that a more differentiated pricing environment might be helpful, while doubting that any change would be likely to emerge soon.

"We may be stuck in this situation for a while, unfortunately," Tolson said.

"We are controlled by the wholesale pricing mechanism; we have to recognise that.

"So we will have to look for those changes probably to come through from a Platts or an OPIS.

"They will have to define quality parameters, and necessarily create quality tiers for VLSFO with different prices."

The sails are likely to save the vessel up to 8% of its fuel consumption.

Meanwhile, the U.S. is heading into a major summer oil squeeze.

Staal will be in charge of all of the firm's day-to-day business.