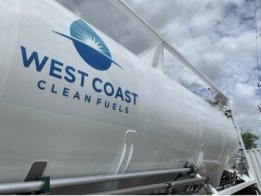 A start-up backed by global fuels company World Fuel Services (WFS) is set to start supplying hydrogen to ships on the US West Coast.

West Coast Clean Fuels (WCCF) -- a joint venture between WFS, Clean Marine Energy and Pasha Hawaii Holdings -- has signed a deal to supply hydrogen to the first fuel cell-powered ferry in the US, it said in a press release this week. The company will supply hydrogen from the first quarter of next year, at first in Bellingham during sea trials and later in San Francisco when the vessel commences passenger operations.

The vessel, SWITCH Maritime's Sea Change, will operate in San Francisco Bay. The company has not yet revealed whether the fuel sourced will be green hydrogen or a version produced using fossil fuels.

WCCF has also signed a deal to supply 78 million gallons of LNG to Pasha Hawaii's container ships the George III and the Janet Marie at Long Beach, it said in the statement. The ships operate between the US West Coast and Hawaii.

"WCCF has the ability to scale its fuelling infrastructure to service additional low-carbon ships at the Ports of Long Beach/Los Angeles and San Francisco/Oakland, which are some of the world's busiest seaports and leading gateways for international trade in the Western Hemisphere," the company said in the statement.

"By managing the complexity associated with developing end-to-end clean fuel delivery chains and working with regulatory bodies to permit fuelling operations, WCCF is helping pave a pathway to decarbonize shipping locally and reduce the heavy toll of these bustling ports on the environment, local air quality and health of local communities."

The concern was over one of the judges having served in the Danish military and wearing a shirt with the logo of US space agency NASA on it.